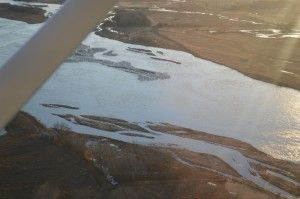 Peak migration varies from year to year, and may last for a longer or shorter time period based on environmental conditions. How long will the Sandhill Cranes stay? This is an impossible thing to predict. However, several factors can play a role. This is an unprecedented El Niño year, which brings warmer weather and augments moisture regimes throughout North America. This January was the warmest in recorded history globally, that may also play a role.

How long the Sandhill Cranes stay in Nebraska could be influenced by several local factors as well. First, the amount of agricultural waste forage (waste corn) available and the amount of natural forage available (macroinvertebrates, small mammals, fish, early emergent herpetofauna, bulbous wetland plant roots (Juncus spp.), etc.) could play a role in the length of their stay in Nebraska. How well will the staging area along the central Platte River meet their nutritional needs for future breeding and migration? Producing natural forage is an especially essential function of conservation properties like the Crane Trust, Audubon’s Rowe Sanctuary, The Nature Conservancy, and the Platte River Recovery and Implementation Program. We provide a source of protein and nutrients that agricultural systems cannot with the native prairies and wet meadows we protect and conserve. Second, predominating weather systems over the next month (lack or abundance of optimal migration days with warm winds out of the south) may also play a role. We don’t want to make any assumptions going forward. What we do know is that we have Sandhill Cranes Roosting in the North Channel of the Platte River, which is more wooded and narrower. This does not usually happen until mid-March when Sandhill Crane numbers are nearing their peak. The North, Middle, and South channels of the Platte River on the Crane Trust’s properties all had roosting Sandhill Cranes last night.

I’ll use two past years (2006 and 2013) to describe variations in peak migration numbers and timing. In 2006, we had a rather late, rapid, and high peak in numbers. The year brought a peak of 301,000 Cranes which is quite high compared with many other years. The date of peak extended into early April (4/5/2016). In 2013, by contrast, there was gradual peak and decline of crane numbers, a lower peak (237,000), and an earlier peak (3/18/2013). There is more than 2 weeks between the timing of those 2 peaks in crane migration. In some ways 2016 may be a bit like an inverse of 2006, with a quick build and gradual decline in numbers; only time will tell. However, we are certainly on the early side of both of the example migrations described in Figures 1 and 2 below. When exactly peak will be, and how high numbers will climb remains to be seen. The Crane Trust’s properties currently have about 40% of all the Sandhill Cranes (SACRs) currently detected via our survey methodology along the Big Bend of the Platte River.

Note: This totals about 40% of all Cranes currently detected along the Big Bend of the Platte River, NE