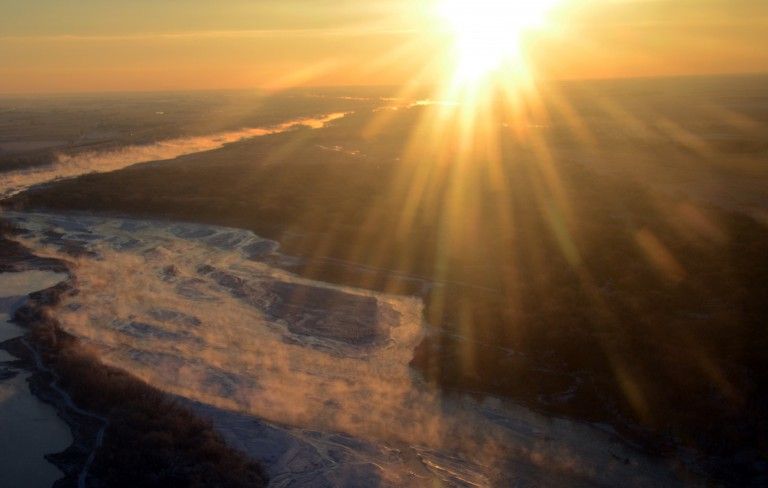 The total Sandhill Crane count for 03/08/2016 was 239,500 with an error of +/- 7.14% estimated from photo subplots. There were 63,500 Sandhill Cranes on Crane Trust Properties. The overall count is up from last week by about 26,000. We usually start counting right before official sunrise, however, due to unforeseen technical difficulties we were unable to get airborne over the river until about 5 minutes after sunrise. This 15-20 minute delay likely means that we missed some birds that left the river to forage in wet meadows and agricultural fields before we could get them all counted. We did count Sandhill Cranes in the fields adjacent to the river, however, our estimate is likely a little low as there were probably Sandhill Cranes already too far afield to count.

This Monday (03/07/2016), during our regularly scheduled flight time, we were unable to fly because of foggy conditions in the river valley. From spending a lot of time in the crane blinds in the last week, we knew we were close to peak numbers and we wanted to get a count early in this week, especially as the possibility of unpredictable morning fog persists in the weekly weather forecast. We would have been unable to conduct our count today without the support of the USFWS Rainwater Basin Joint Venture. A special thanks to Dana Varner and Alyx Vogel of the Joint Venture for agreeing to switch aircrafts with us. Also, a special thanks to Holly Michael of Kearney Aviation and Ross McLean from the Crane Trust for adjusting at the last minute to help get this count done.

We may be very close to peak Sandhill Crane numbers on the Big Bend of the Platte River. Some years peak numbers have been around 230,000 and other years as high as 310,000. The peak count varies depending on how many different migratory populations overlap here at one time and how long the Sandhill Cranes stay in the area. One thing is for sure, we are close to peak and these numbers are a couple weeks earlier than in most years. However, we could potentially see even higher numbers next week. Only time will tell.