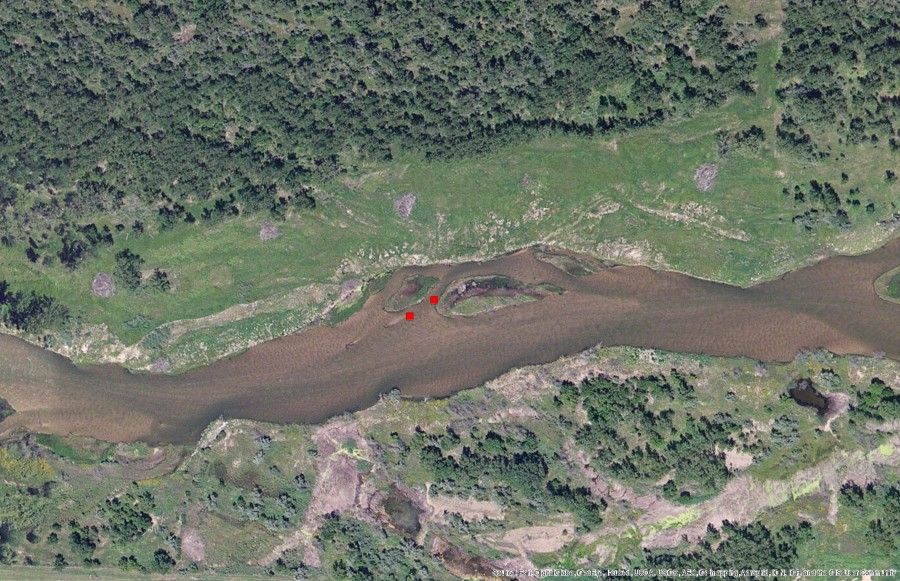 Last Wednesday night on March 23rd the Crane Trust enjoyed wind gusts up to 50 mph and thunder-snow. This storm was interesting to watch, but caused us to cancel blind tours as even the hardy sandhill crane does not fly well in these winds. By observation here at the Trust we saw most of the roosts in areas were where trees sheltered them from the wind. Now these roosts are not typically used as the channel tends to be deeper or narrower and does not provide as good of protection against predators. However, when the wind speed is over 30 mph and the gusts are reaching 50 mph most creatures would want some shelter. Luckily, our tracked cranes were experiencing the same winds and we have the opportunity to take a look into exactly how these birds responded.

Crimson, Slate, and Indigo all weathered the storm successfully in Nebraska on Wednesday night and Thursday morning. Crimson and Slate found narrow wooded channels on the North Platte River to ride out the high winds and snow, moving very little through the night. We know from our time lapse camera study on the river in 2014 that during strong storms and inclement weather sandhill cranes will get in a sleeping pose and not move much during a storm. They stand with their head turned back with their bill placed under one wing. Crimson and Slate would have seen the worst of the storm given that they are furthest west in Nebraska and the storm came in from Colorado. Indigo rode out the storm in a slightly more open channel of the Platte River just west of the Crane Trust’s Dippel property. We are glad that our three tracked birds in Nebraska are doing well and continue to build up fat reserves in the variable habitats of Nebraska before continuing the longest leg of their migration north.

However, not all the cranes had reached Nebraska at this point! Olive is still down in Texas spending time near a cattle operation pond. We’ll let everyone know when Olive finally decides to leave Texas and when Crimson, Slate, and Indigo move on from Nebraska.