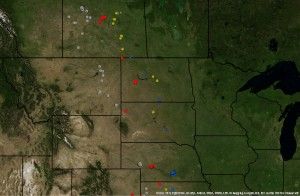 It has been a long migration for the cranes we are tracking, but they still have most of the journey left to go. Our four sandhill cranes will be traveling all the way into Siberia to nest, and so their total flight path is over 7,000 miles in some cases. This past week has seen a good flurry of activity from the cranes, and even Olive has left the United States.

Slate was the first to reach the staging grounds in Saskatchewan, reaching the area on April 1st. This crane took a unique route after leaving Nebraska by traveling through Montana instead of the Dakotas. Besides Olive, who skipped Nebraska entirely, Slate spent the least amount of time in Nebraska. After only spending a full week in mid to late March on the North Platte, Slate began the move on to the next step in their migration. Crimson was the next to reach Canada; after leaving the Platte River Crimson had a long stopover in North Dakota, but finally moved on into Saskatchewan on the 8th. Crimson spent three weeks in Nebraska spending time on both North and South Platte as their location was just where the two tributaries meet. Crimson arrived just before mid March and left in the first week of April. Next to reach Saskatchewan was actually Olive, who finally left Texas on April 3rd, and after a quick stop in Kansas flew straight on to the Dakotas and by the 9th has reached the Saskatchewan area. Olive spent no time at all in Nebraska besides looking down at it as they flew past. Lastly, we have Indigo, who spent their time closest to the Trust lands, has only just reached Saskatchewan. Indigo spent the most time on the Platte just west of the Trust; coming within 10 miles of Headquarters. In total, Indigo spent 23 days on the Platte River and arrived just after mid March then left just after the first week in April.

Each of these birds, if they maintain the breeding grounds from the previous seasons (as they typically do), must reach Siberia. Often sandhill and whooping cranes will stage in Saskatchewan before migrating on to Northern Canada, Alaska, and Siberia. This region is a safe place for a meal and rest before the final leg for many, and is full of shallow lakes and ponds that are perfect for whoopers and sandhills to catch a few frogs, snack on some worms, and dig for plant tubers. This is another region that is vital to a successful migration for cranes and other migratory birds. Soon, we’ll send out another update on the rest of this huge migration by one of the most charming birds that comes through Nebraska: the sandhill crane.