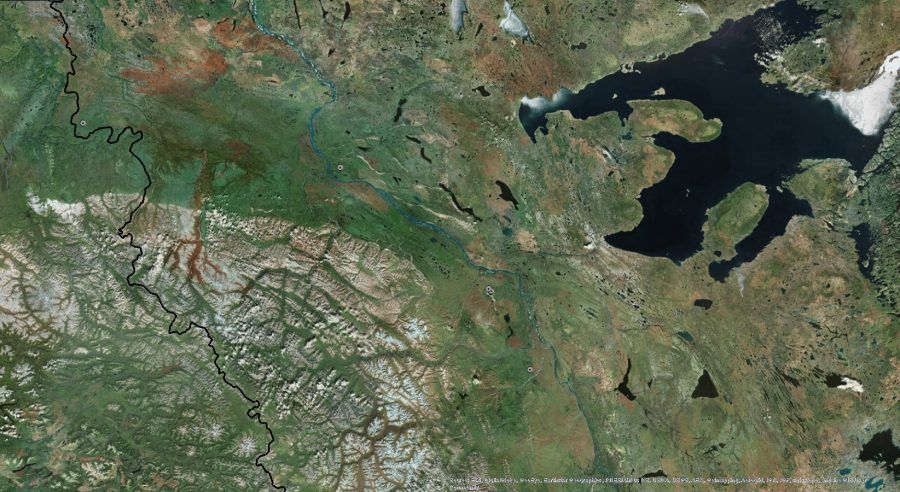 Only Slate has taken off from Saskatchewan where they and the other cranes have been bulking up for the long trip to Siberia. Slate left Saskatchewan on April 29th and since then has nearly reached Alaska. Slate is passing through the Mackenzie River Valley that is a vital passage for the cranes to reach Siberia. Mountains pose a strong obstacle to migration, and therefore cranes rarely cross over peaks. Instead, they find passes and river valleys to go through. This specific region is where the Mackenzie Mountains split, but south of the this point is the Columbia and Rocky Mountain ranges. These mountain ranges are not impossible to cross, but are very difficult. This makes the Mackenzie River Valley a passage point for nearly all of the Lesser Sandhill Cranes going into Siberia. Additionally, it means that stopover habitat in this valley and in the vicinity are crucial for the survival of the only group of Sandhills to cross continents.

Indigo, Crimson, and Olive are still right where we saw them last in Saskatchewan. We expect them to leave soon if they follow the trend set by Slate, staying for about a month in Saskatchewan. By next week we should see Crimson and Olive leaving this area and heading to Alaska. Look for an update next week to learn if the cranes moved!