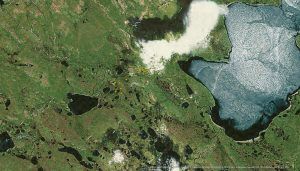 This is our final update for the migration season and tracking our old friends! Everyone has settled into their breeding grounds. Most of the migrants have passed on from the Crane Trust to begin raising their young. Slate and Indigo have moved into Siberia. They took a long flight through the Bering Strait and have chosen their nest regions in what can only be described as some of the most beautiful crane country with land full of shallow marshy lakes. If they haven’t already they will soon build their nest and begin incubation.

Crimson has chosen a small marshy island in the Arctic Circle to stop. This island is just off the tip of mainland Canada, and unlike Slate and Indigo, Crimson did not have a long flight over the ocean. However, Crimson just arrived here so it may be too early to say whether or not this is the breeding site.

Olive is staying true to the stop-and-go migration which we’ve come to learn is their style. After a good long stay in Saskatchewan (remember Olive skipped Nebraska entirely after staying in Texas for about three weeks longer than everyone else), they jumped up to northern Canada in Nunavut. For the past few days Olive has been meandering around a lake-filled region and may choose this site to breed.

Many of the cranes that breed in the southern to central portions of Canada have chicks already, and it is shocking to think that in just over three months the crane colts around North America and in Siberia will be starting their first migration. Though the fall migration is more difficult to see, the lucky observer will get a chance to see the cranes fly overhead with whistling colts alongside their parents. The Trust property is a vital stopover site for fall migration, just as it is for the spring, and we often get roosts along our stretch of the river. The best time to find the fall cranes is in the middle of a sunny day when the winds are coming from the South. Many cranes will kettle, fly in circles in a thermal that lifts them high into the air, and warm sunny days are perfect for the cranes to enjoy flight.