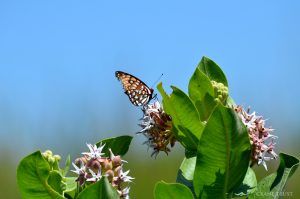 Throughout the United States we have nearly 850 recorded butterfly species and just over six times that many moth species. This makes up the order Lepidoptera and totals about 6,230 species in the United States alone. These insects often have beautiful and distinct wing patterns that draw our eye, and butterflies are especially popular compared to other insect groups; perhaps because they are relatively easy to identify and are large enough to do so with the naked eye.

This month more and more butterflies will begin crossing your path. Many resident species, or species that do not migrate, will begin to flutter about after having completed their metamorphosis. We will also see an increase in migrants; butterflies that travel up from the southern portions of the country each summer despite their inability to handle winter and lack of southerly migration at the end of the season. Often times we call the species that travel about vagrants, which typically says that the presence of that species is temporary and that the individual will not be breeding here. For example, most of the mid-sized yellow butterflies you see are Sulphurs, and many of these species migrate north and breed there, but do not often make it back south for the winter and so die with the cold.

Recently, certain species like the Monarch have been receiving much of our attention due to drastic declines of this migratory species that visits the majority of America each summer. However, we should remember that when one species, that crosses a vast span of the country, is declining there are local changes directly causing this, and therefore many other species are in trouble too. Sensitive species like the Regal Fritillary, the Black Dash, the Arogos Skipper, the Rita Blue, the Ottoe Skipper, the Tawny Crescent, and many of the moths in the Underwing group are other examples of other declining species in Nebraska. Regal Fritillaries are especially important, and are under review for federal listing as endangered or threatened. The Trust has quite a strong population of these beautiful butterflies that are restricted to untilled relict prairie. This species was dependent on vast expanses of tallgrass prairie that are now in limited supply which has led to a 75-95% decrease in their population in the last 30 years. Though the Trust’s mission is to protect the habitat of migratory birds by doing so we provide a home or stopover for many at-risk species including nearly 100 species determined to be at-risk by the Nebraska Natural Legacy Project.

Recent finds for the Crane Trust include: Monarch, Old World Swallowtail, Eastern Tiger Swallowtail, Regal Fritillary, Checkered White, Tawny-edged Skipper, and Gray Copper. These have been sighted during monitoring surveys run by Trust researchers in partnership with our volunteer citizen scientists. Reporting your own sightings is as easy as taking a picture then submitting the picture and the location to butterfliesandmoths.org. Websites like these allow us to identify species and follow local and global trends. An upcoming special citizen science event is the 4th of July Butterfly Count. This day is set aside for you to find all the butterflies you can in a given area. Submit your sightings to Butterflies and Moths or by participating in an organized count with the North American Butterfly Association.