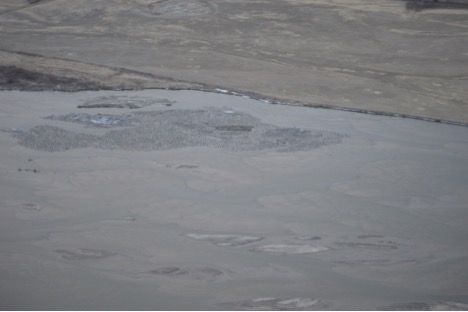 The Crane Trust is back to flying the 90 mile route from Chapman, NE to Overton, NE. Our aerial count for the morning of Monday, February 13th, was 8,146 Sandhill Cranes. These were almost exclusively in bridge segment three (of eleven) from HWY 281 to HWY 40c (Alda road). Based on our photo-subplot count the aerial count is approximately 3.2% low, which gave us about 8,400 Sandhill Cranes (SACRs) rounded to the nearest 100. This is almost the exact same number of SACRs detected last year at this time, which was 8,200 on 02/16/2016 by contrast there was about 3,800 SACRs at this time in 2015. In addition to Sandhill Cranes, we also counted Bald Eagles utilizing the river during their migration in February as well as Dark Geese. Today we counted 45 Bald Eagles (39 last year during week 1) and 4,200 Dark Geese (9,200 last year during week 1).