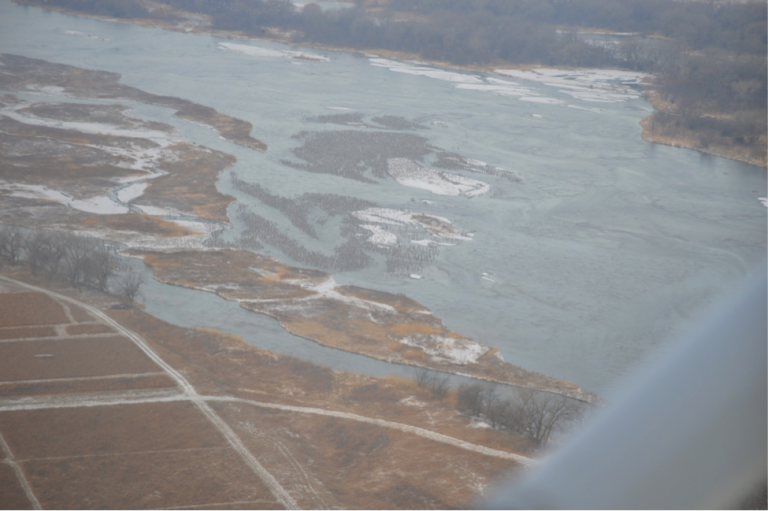 Our aerial count for this week was 404,000, with an absolute error of +/-8.6%. It was cold and bumpy this week, but better conditions for counting than the last. Overcast skies delayed the start and we had a number of birds in the field (about 13% of the total counted). Error rates were all in the same direction, down, so we likely undercounted by some margin. Statistically, our last 2 weeks of counts were the same. What does that mean? I don’t really know; I suspect that many Sandhills came early and have stayed, especially as a recent cold front held birds in the area. In fact we saw minimally 15,000+ snow geese that moved back in from the north and were foraging in corn fields in the Platte River Valley within our survey area. I have no idea how many new Sandhill Crane arrivals and departures have taken place in the last week, but regardless, they have about equaled out. Next week the FWS will be counting a larger area; this effort yields the most comprehensive single count of the mid-continental Sandhill Crane Population. Generally this has been done near the end of March, but has been moved from the 28th to the 22nd this year to accommodate the early mass arrival of the Sandhill Cranes to the Platte River Valley. Jeff Drahota is involved in coordinating this effort regionally, and can be reached with any questions at jeff_drahota@fws.gov. We at the Crane Trust will be flying again on March 20th if weather cooperates.

*Data property of the Crane Trust: Permission required before use or distribution.