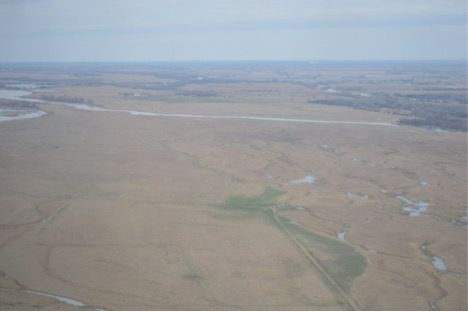 Given low cloud ceilings and morning fog we missed week 7 of surveys this year. However, we squeaked out week 8; this past Tuesday morning we were up before sunrise and completed a count. We counted 117,000 Sandhill Cranes with a relative error of -14.0% suggesting the actual number was just over 133,000 SACRS. There are still a number of Cranes persisting off the Crane Trust’s Alda property and a roost in front of Shoemaker Island, but the vast majority of Sandhill Cranes are west of the Crane Trust at this point as the Lesser Sandhill Cranes in the western part of the hour glass of the central flyway make their way through the Big Bend of the Platte River on their long migration north. We will have 1 to 2 more weeks of counts left. If the count next week is below 5,000 SACRs we will be done for the year. However, if it exceeds that number we will also count the Tuesday after Easter to finish out our 10 weeks of Sandhill Crane counts. It was another intense and interesting migration as they all are. It appears that there is still excellent Crane viewing in the Western part of our survey area between highway 10 and Gibbon. Until next week.