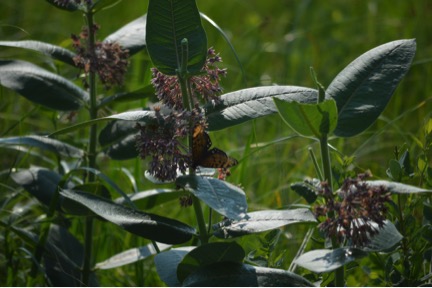 Scarce availability of relic tallgrass prairie has had a major impact on many species of native wildlife in the Platte River Valley. The decline of the Monarch Butterfly is a relatively well-known example in the Great Plains. However, the decline of another butterfly, the Regal Fritillary, is less familiar to many. The Regal Fritillary is an endemic, non-migrant, butterfly that is seemingly dependent on relic tallgrass prairies (Figure 1). The species once had a wide range extending west into lowland tallgrass prairie parcels mostly along rivers in Colorado and east into the grassland-savanna foothills of the Appalachian Mountains, but now only exists in small, patchy populations in the Great Plains. One of these sustained populations is located on a relic prairie at the Crane Trust. The biological science team has recently published an article in the Journal of Insect Conservation describing the habitat components that have sustained this population on an island of the Platte River and within a sea of agriculture. Our monitoring program has been able to deduce critical habitat requirements of this pasture that sustain the population on this portion of the property and not within other pastures. The article concluded that Regal Fritillaries require large, connected pastures of tallgrass prairies that have never been tilled. These pastures must also undergo occasional, moderate disturbances that maintain a heterogeneous landscape, which helps reduce encroaching woody and exotic plants, while at the same time resting large portions of prairie from managed disturbances (grazing, and especially fire) for up to 7 years to sustain thatch for larval development. The most important plants to the Regal Fritillary are violets (Viola spp.). Much like the association of milkweeds (Asclepias spp.) to Monarch Butterflies, violets act as a host plant for larvae of the Regal Fritillary and are abundant in the pastures that contain Regal Fritillaries. To view the scientific article please follow the below link:

Going forward these findings will help guide our land management decisions to support prairie wildlife that prefers mature thatchy grasslands free of shrub encroachment benefiting not only the Regal Fritillary but also other species that prefer the same habitats and management regimes such as the short-eared owl and the Henslow’s Sparrow. Our objective, as far as this species of butterfly is concerned, are to not only manage the pasture the population currently exists on, but to expand the range and population within our conserved landscape. We will continue to manage their present pasture to maintain a mosaic landscape and critical habitat components that support the isolated population. Our land management team has integrated the removal of tree lines bordering the current population’s pasture to help increase the connectivity between it and adjacent pastures. We hope that this effort will encourage the immigration and expansion of the Regal Fritillary to other relic properties. Finally, we have begun collecting seed stock and cultivating violets and nectar providing plants to encourage population growth and expansion of the preserved population. We hope that these efforts allow our conservation lands to support healthy and abundant numbers of Regal Fritillaries as their numbers continue to decline in the Great Plains.