Songbirds Sing Us Into Summer 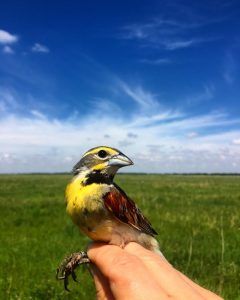 Bobolinks, Dickcissels, Grasshopper Sparrows, and other feathered songsters signal summer’s approach when they arrive on the Great Plains from their wintering grounds in Central and South America. Now, starting early each morning at the Crane Trust, we hear their uplifted voices ringing through the prairie. But there are far fewer of them now than there were a generation ago. Global population trend data show that over the past 45 years, Grasshopper Sparrows have declined by 68% and Bobolinks by 60%, both alarming trends. While Dickcissels have not fared as poorly, their populations have declined by 14%. These and other grassland songbirds comprise the most rapidly declining group of birds in continental North America. As Neotropical migrants – birds that summer here and winter in the tropics – they are particularly vulnerable to habitat loss, climate change, and other human impacts.

Crane Trust lands provide critical breeding habitat for grassland birds. We can speculate about the causes and mechanisms of their declines, but we need empirical data and analyses to understand what is driving them and to inform our adaptive management efforts. In keeping with the Crane Trust’s mandate to protect habitat for migratory birds, we have launched an exciting new project to investigate and quantify avian responses to our land management actions such as controlled burning, grazing by bison and cattle, invasive plant removal, and native plant restoration. We are now collecting field data on birds that we will compare with data previously collected at the Trust from 2002-2007, using the same methods.

Comparing new with past data on grassland birds at the Trust will allow us to understand how our bird communities and populations have changed over time in response to land management decisions, including our recent re-introduction of bison to the prairie and restoration efforts to remove invasive plant species and re-establish native species. Long-term data will also allow us to explore birds’ responses to climate change, including increasing temperatures and changing precipitation patterns, which scientists expect will have major implications for bird populations in the years to come.

Like so many good things, we can’t do this alone! We are working together with the Institute for Bird Populations and field biologists Alexander Glass and Madison Sutton as part of a nationwide research program investigating bird population dynamics and trends. Part of this effort includes marking birds using uniquely numbered metal bands provided by federal Bird Banding Lab, as part of the U. S. Geological Survey. Deploying these bands helps us track birds’ movements and survival over time. We will analyze and apply our findings to implement land management decisions beneficial to grassland birds at the Crane Trust, so they will continue to brighten our summer mornings far into the future!