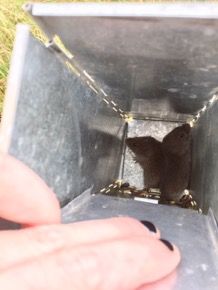 The start of September means Small Mammal Monitoring is in full swing here at the Crane Trust. Starting the second week of August, our team sets small mammal traps until the end of September. Following a transect line, live Sherman traps are set every 5 meters for 200 meters overnight. The next morning, we head back to the transect line to check each trap, identify what we’ve captured, and release it back into the prairie.

Our team sets small mammal traps for multiple reasons; first we want to create an inventory of the species present in different ecological zones (wet meadows, shrubby grasslands, etc.) throughout our conservation properties. Secondly, our goal is to study the response of small mammals to various land management (fire, haying) and grazing regimes (American Bison, Cattle) over time. Small mammal diversity and abundance serve as indicators of the ecological health and unique characteristics of our prairies and meadows. Small mammal diversity decreases, for example, when prairies are too heavily grazed (Johnson and Anthony 2006). Similarly, tree encroachment limits small mammal species diversity (Horncastle et al. 2005). Our team is not only looking at the number of individuals captured, but also at the number of species. This year, we have been quite lucky in capturing both a large number of individuals and a large array of species.

Most commonly captured is the meadow vole (Microtus pennsylvanicus), and with good reason. Females can breed when they are only a month old and can produce litters every three weeks for the duration of their lives. These little guys are active year-round, which is why their ears are tough to see; larger ears are difficult to keep warm in the winter, and more than likely would succumb to frostbite. They prefer areas of thick, lush grass to forage for food/build nests, and create small “roadways” through the grasses to move more easily. Make no mistake; for a tiny animal, they’re quite feisty. Mishandle these and you’re more than likely to get a bite from their sharp front teeth!

Far less common, but still just as important to our ecosystem here at the Crane Trust, is the short-tailed shrew (Blarina brevicauda). Rather than hanging out in open grasslands, these guys can be found in shrubby meadows. Like the vole they are active year-round, but instead of making roadways through the vegetation, they dig vast networks of burrows under leaf litter or snow to travel and nest in. Short-tailed shrews also store prey in these burrows; they emit venemoussaliva to paralyze insects and even other small mammals, such as young deer mice, when other food sources are scarce. In order to seek out prey, they use a series of ultrasonic clicks since their eyesight is extremely limited; the echo back helps them navigate and locate their next meal. When baiting traps in optimum shrew habitat, we toss in a few dried mealworms, as a shrew’s diet mainly consists of insects and their metabolism is extremely high. We want to keep our mammals happy!

Other small mammal species trapped this season include the meadow jumping mouse (Zapus hudsonius), white-footed mouse (Peromyscus leucopus), and deer mouse (Peromyscus maniculatus). We have also captured one plains harvest mouse (Reithrodontomys montanus) this trapping season, an uncommon species whose population is declining due to decreasing prairie habitat (Panella 2012). Who knows what else we’ll find?