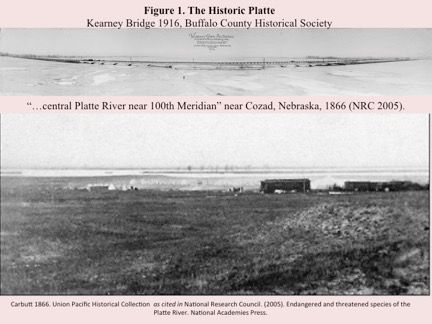 The main channel of the Platte River once exceed 1.5 km wide in many locations (Figure 1, 2). However, since the late 1800s we have appropriated about 80% of its flows for human use and this has led to massive losses of in-channel habitat. The Platte River has not just lost flows of water, but also of sediment. Historically the North Platte provided the majority of fine sediment, but today it is largely captured behind large dams in reservoirs. Now the Central Platte River receives most of its sediment from the South Platte River, which is courser, and limits sandbar formation which are so important to roosting cranes. The Central Platte River, hosts the largest gathering of Sandhill Cranes anywhere in the world during their spring staging period in March of each year. It also serves as one of the key critical habitats in the Great Plains migration corridor for the last remaining wild population of Whooping Cranes, which travels biennially between Aransas National Wildlife Refuge in Texas and Wood Buffalo National Park in northern Alberta. As flows in the Central Platte River decreased so did the channel width, and the former channel was subsequently colonized by early successional tree species, leading to further change in the river. The Platte has transitioned from a typical braided prairie river to a more meandering, forked, and wooded River. In short, the Platte River has changed a lot. Ecologists often think about changes such as these as “regime” shifts from a “historic” to a “novel” system.

Today the Platte River is a “hybrid” between what it once was and what it would become without management (see Hobbs et al. 2009). At the Crane Trust we use our resources to restore and protect portions of the Central Platte River Valley that reflect the character of the historic ecosystem to maintain and improve habitat for migrating Whooping Cranes, Sandhill Cranes, other migratory waterbirds, grassland birds, and the ecosystem that supports them. Parts of the Central Platte River Valley are designated as over-appropriated, meaning there are often more permits to use water than water available. However, there are still efforts to divert even more of its flows (Potter 2008). In addition to our efforts to manage and advocate for the Platte River, we also conduct research. Recent research by Brinley Buckley et al. (2017) demonstrates the hydrological dynamics, water quality, and phenology of the Platte River using time-lapse imagery and passive monitoring equipment. New research by Caven et al. (2018) describes the rare process by which a Bald Eagle depredated a Sandhill Crane and suggests that given the changes in habitat and the recovery of Bald Eagle populations in recent decades that these events may become more common.