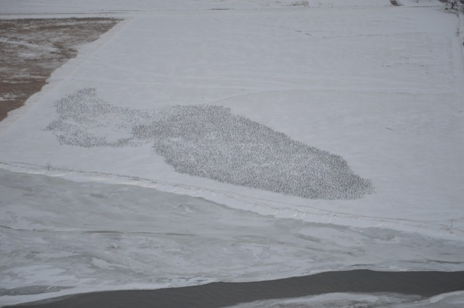 We continue to count the same general group of birds; our estimate for today’s count was 16,500+5,445. No Sandhill Cranes roosted on the Platte River last night; the two roosts we detected were in fields near the river about 3 miles east of Alda Rd. Fluctuating water levels may be making the ice unstable, causing the cranes to seek alternative roosting locations. Our protocol is designed to count roosts of Sandhill Cranes on the main channel of the Platte River, and on average most of the off-channel birds we detect are within 3 km of the main channel. In recent weeks, we have detected cranes roosting further than this distance from the Platte River in fields to the south; therefore given the current weather conditions we may have missed some cranes. However, after calling to major stopover locations in Oklahoma and Kansas yesterday it would appear that most of the Mid-Continent Sandhill Crane population remains near to their wintering grounds. Examining the long-term forecasts in the central and southern Great Plains, the first day that looks favorable for potential Sandhill Crane migration to Nebraska is March 11th. We counted 8,000 dark geese this week, which is an increase over the past few weeks. Waterfowl are strong flyers, and though they benefit from favorable prevailing winds during migration, research suggests they can migrate in less favorable conditions than cranes, which largely depend on thermals and favorable transport winds to complete their long migrations. Given that peak dark geese counts often precede  peak Sandhill Crane counts in the Central Platte River Valley (CPRV), there is a chance that what this migration may lack in duration will be made up for in spectacle as a number of waterbird species could migrate through the CPRV at the same time in the coming weeks. A further addendum to our comments last week regarding foraging; though the Sandhill Cranes in the CPRV seem to be foraging at a relatively normal rate during the middle of the day, we have noted since our last observations that they are not foraging during cold (~15 F) mornings and are leaving their roosting locations quite late in these contexts (~10:00-11:00 hrs.). It is unclear how this is impacting them, but it is certainly possible that these Sandhill Cranes have not been gaining weight as usual in their first few weeks here.