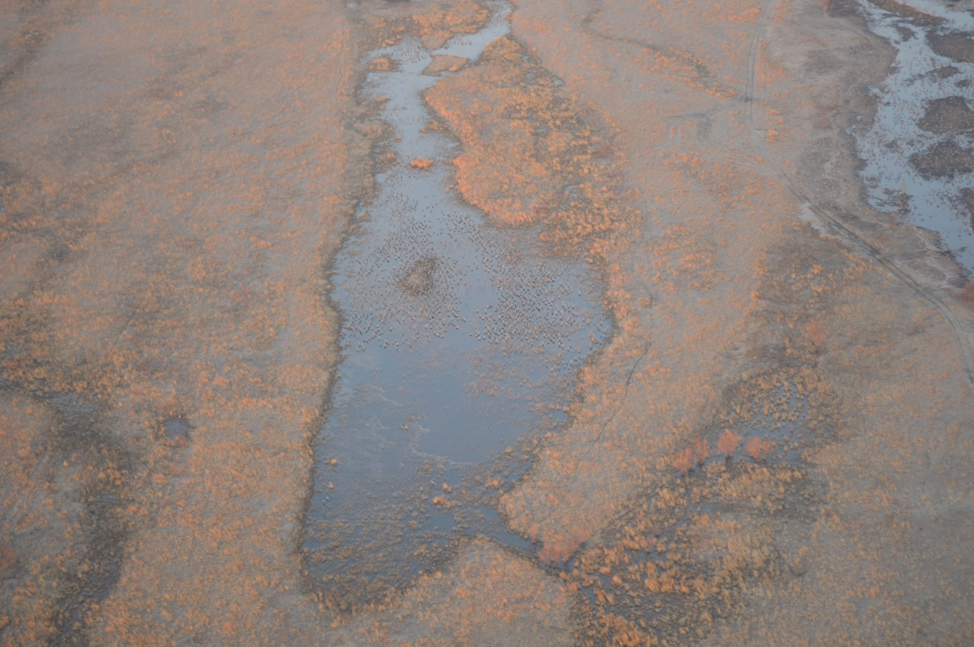 On 21 March 2019 we counted 326,400+72,000 Sandhill Cranes in the Central Platte River Valley. Our bias estimates actually suggested that our numbers may be about ~15% high, but I decided not to apply the bias correction to our public report today because I am certain we missed birds outside of our survey area on Thursday morning. However, I did apply the confidence interval surrounding the count. About 54% of roosts were located in flooded off-channel habitats, predominantly in flooded wet meadows, particularly in the eastern and central portions of the survey area, which covers from Chapman to Overton, Nebraska.  Sandhill Cranes began to forgo roosting in the main channel of the Platte River on the evening of 14 March 2019 based on views from blinds on Crane Trust property as water levels increased and ice began to break up. On the evening of 15 March and the morning of 16 March the Platte River near Grand Island, Nebraska, crested at over 7.7 ft. (flood stage = 6.5 ft.) and over 16,000 cubic feet per second (cfs) according to provisional USGS data.  Though river stage had dropped to about 5.15 ft. and flows had dropped to just over 4,700 cfs on the evening of 20 March 2019, exposing sandbar habitat in wider channels, the majority of Sandhill Cranes continued to roost in flooded wet meadows. Sandhill Cranes roost in flooded palustrine wetlands throughout their winter and migratory range, so in some ways this is not surprising. As I watched cranes foraging over the last few days I noted the voracious rate at which they were probing the ground in these wet meadows. Earthworms are a preferred food of Sandhill Cranes, and flooding often brings them closer to the surface. Sandhill Cranes also had a full or nearly full moon over recent evenings allowing them to see better and potentially keep foraging into the evening. Interestingly the recent full moon is termed the “Worm Moon”; it is a sign of spring and is named for the earthworms that begin to emerge at this time. It is a common misconception that earthworms come to the surface to breathe, as they breathe through their skin and continue to do so in moist soil. In fact, they actually need some level of moisture to breathe. Scientists think the moisture provided by rain or flooding in meadows actually brings earthworms to the surface as it allows them to migrate further over a shorter period of time than they could through the soil. As temperatures hit 61 °F yesterday several flooded meadows receded significantly as did the river, and judging from in front of the Crane Trust blinds, a higher percentage of birds were roosting in the river last night.  Currently river flows are at 3,010 cfs and river stage is at 4.7 ft. near Grand Island, Nebraska, so we would expect more cranes to roost in the river this evening, as these are relatively normal river conditions. Long-term forecasts provided by the National Weather Service suggest that there is a chance flows could increase again between 23 and 30 March 2019, with between a 10% and 25% chance of reaching moderate (7 ft.) flood stage again. Our thoughts are with our neighbors who sustained property damage and other losses throughout the state as a result of recent flooding.