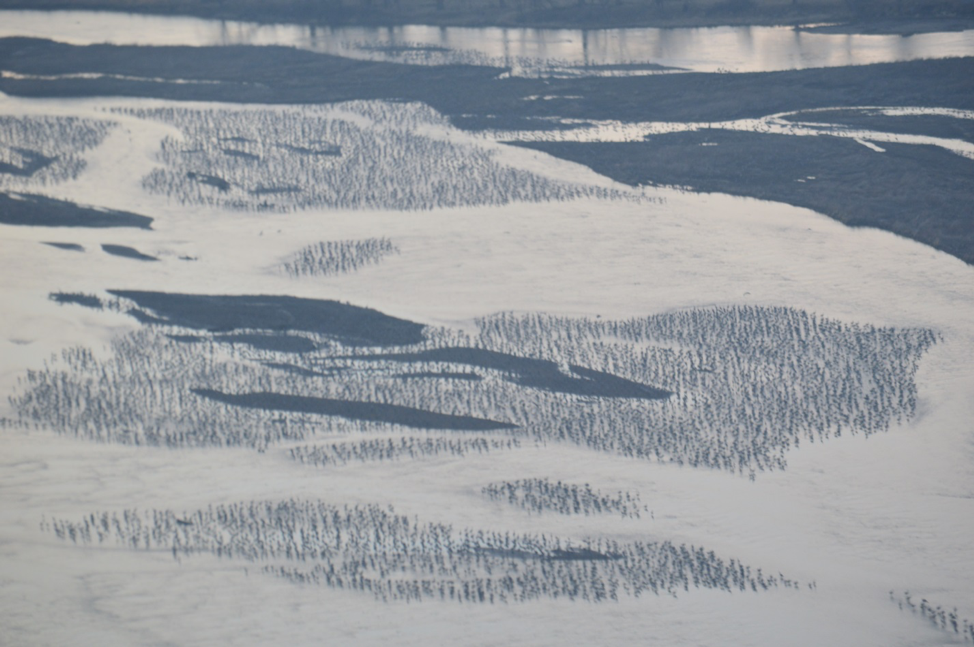 On the morning of 26 March 2019 we counted a new record high Sandhill Crane count for our survey, which has run since 2002 and covers the Central Platte River Valley between Chapman and Overton, Nebraska. Our survey does not include birds that roost in the Central Platte River Valley west of Overton, Nebraska, or in the North Platte River Valley. We counted a bias corrected 659,870+61,378 Sandhill Cranes eclipsing our record which was set last year (598,000+111,000). Note that the confidence intervals surrounding these counts overlap. This week’s count is a significant increase over last week’s 326,400+72,000. However, it is important to note that we estimate the number of Sandhill Cranes roosting on the river as well as in adjacent meadows and fields easily detected from the flight path. We do not effectively count cranes outside of this relatively narrow survey area, but generally, as we survey from civil twilight (before sunrise) to just after sunrise the majority of Sandhill Cranes are in this area. However, last week during high flooding the majority of crane roosts were detected in off-channel habitats in flooded wet meadows, pastures, and agricultural fields. Therefore we could have undercounted to some degree last week. In any case, the majority of cranes were back on the river in recent days as flows have receded to a relatively normal 2,530 cubic feet per second (cfs; daily mean based on 77 years of records is 2,270, USGS 06770500), down from a high of around 16,000 cfs on 15-16 March 2019. We have had great conditions for northward migration over the last two afternoons following our recent count, and I certainly noticed a number of cranes kettling high into the sky yesterday afternoon potentially on their way northward. However, new cranes could have also come to the Central Platte River Valley over the last two afternoons. In any case we are right at or just past the peak of migration at this point and there are a great number of Sandhill Cranes in the Central Platte River Valley.

One factor that may explain this high peak is that generally the eastern portion of our survey area, represented by the Crane Trust (segment 3), peaks 1-2 weeks ahead of the central and western segments per our database, represented here by Rowe Sanctuary (segment 7). However, given the delayed start to migration in the Central Platte River Valley this year and the recent warm weather, a very high percentage of the Sandhill Cranes may be here at the same time this migration. Both segment 3 (Crane Trust) and segment 7 (Rowe Sanctuary) had around 200,000 Sandhill Cranes on 26 March 2019 approaching densities of 9,600 Cranes per km of river channel across those largely restored segments. These densities sound fantastic, but they could have a biological risk in terms of disease. It is the goal of conservation organizations along the Platte River to improve habitat throughout the Central Platte River Valley to distribute Sandhill Cranes more evenly.