As a national symbol, the Bald Eagle is arguably the most recognizable raptor in North America. This iconic bird can be found plucking fish out of water from northern Alaska in the summer, to central Mexico in the winter, and as a year-round resident in many areas in-between. Bald Eagles can get up to 40 inches tall and possess a 7.5 foot wingspan. This bird of prey can live for up to 30 years, they reach sexual maturity and begin breeding at 4 or 5 years of age. As a monogamous species for life, they usually return to the area they were born to breed. Nests are typically reused by pairs and have been recorded to reach a massive weight of 2 tons! Younger Bald Eagles are mostly brown, lacking the characteristic white head of adults. By the numbers, this bird of prey is quite impressive. But perhaps the most impressive Bald Eagle fact is their recovery from the brink of extinction.

In the early 1800s, there were an estimated 400,000 Bald Eagles across their range. By the 1950s the Bald Eagle population had been reduced to only 412 breeding pairs, a shocking decline for an official national symbol. An array of human factors could be directly linked to some degree of the Bald Eagle decline. Rapid industrialization resulted in eagle deaths by power-line collision as well as oil, lead, and mercury poisoning. It is common knowledge that development, mining, and pollution have had negative consequences for native wildlife. However, knowledge of historic large-scale eagle eradication efforts is not common knowledge. Bald Eagles were wrongly blamed and shot for substantial predation of young lambs, and even children, from farms. Bald and Golden Eagles have been recorded depredating lambs, but scientific studies suggest that this is a rare occurrence. An account in Alaska reported as many as 70,000 Bald Eagles killed over a 12 year period. Despite the 1940 approval of the Bald and Golden Eagle Protection Act to prohibit eagle hunting, Bald Eagle numbers continued to plummet until 1967 when they were included on the very first list of endangered species, which provided protection under the Endangered Species Act of 1966 along with the Florida Manatee and the Grizzly Bear.

The implications of these deaths were worsened as Bald Eagles, along with other birds of prey, were struggling to replenish their population because of a compound created in 1874 called DDT. Beginning in 1945 this very effective insecticide was widely used on crops and had some awful consequences for eagles and humans alike. The chemical readily polluted water sources and was taken up by aquatic organisms and stored in their fatty tissue. As a result, DDT was passed through consumption from one link in the food chain to another. At each level of the chain, DDT became more concentrated in the organism in a process known as bioaccumulation. Bird species that ate aquatic organisms were the most affected and they began laying fragile eggs as DDT weakened the shells that would crush under the weight its parents. Bald Eagles are regarded as a top-tier predator of aquatic systems and bioaccumulation of DDT seriously reduced nesting success. The discovery of DDT’s detriment on the environment and wildlife eventually led to its ban in the US in 1972.

Federal protections and the banning of DDT were the first major steps in the revival of Bald Eagle populations. A recovery plan issued by the USFWS addressed issues of Bald Eagle nest protection, habitat quality and availability, and reintroduction to extirpated areas. These combined efforts drove Bald Eagle breeding pair numbers from an estimated 487 in 1963 to an estimated 9,789 in 2006. The Bald Eagle was officially removed from the Endangered and Threatened Species List in 2007 and they are now regarded as a species of least concern for extinction.

As Bald Eagle populations were restored, so was their prevalence and use of the Platte River and in Nebraska. In 1990 there were just a few active Bald Eagle nests in the state of Nebraska and today there are at least 160.  Bald Eagles are relatively short distance migrants and their number peak within the state during the late winter and early spring in February and March. During this time as many as 200 Bald Eagles have been observed foraging at Lake McConaughy. The continued presence of Bald Eagles on the Big Bend reach of the river looks promising as year-round residents have been documented and the Crane Trust currently has at least two active nests on our properties. 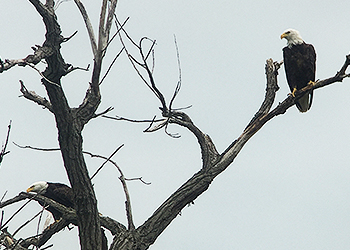 Understanding Bald Eagle ecology and natural history continues to be a focal point for research at the Crane Trust. In 2015 several additional measures of documenting Bald Eagles have been introduced. Systematic avian point count and transect surveys throughout the calendar year detect Bald Eagles on various habitats throughout the calendar year. At this time we also estimate whether the eagles are first, second, or third year juveniles or sexually mature adults based on plumage color. We have observed a considerable amount of younger Bald Eagles along our stretch of the Platte River. In late February and early March we have recorded as many as 40 Bald Eagles between Chapman and Overton, Nebraska since 2015 during aerial Sandhill Crane surveys.  Additionally, we have recorded descriptions of Bald Eagle foraging behavior as they return to the Platte River in large numbers after many decades of absence. We still do not fully understand their food habitats on the Platte River, but in recent years we have documented Bald Eagles depredating Sandhill Cranes and spiny softshell turtle. Through our land management practices we seek to promote nest establishment and the continued success of Bald Eagles along the Platte River. The abundance of eagles on our properties speaks to both the dramatic recovery of the species and the character of our land management practices. This exemplifies how the Crane Trust continues to critically evaluate all management practices and how we adapt efforts considering ecological responses. In this way we uphold our commitment to provide quality habitat and refuge for these iconic raptors.