Bobolinks (Dolichonyx oryzivorus) are captivating grassland birds closely related to new world blackbirds and orioles (Icteridae).  Males perform floating flight displays consisting of a series of alternating fast wing beats and short glides while circling over their territories. Their song is reminiscent of a melodic R2-D2 vocalization (fictional Star Wars robot), consisting of a rapid flurry of notes. Male plumage patterns have been described as mirroring a backwards tuxedo (black and white with a buffy cream-yellow nape). Females have a pale nape, a pinkish beak, a dark crown with a light central stripe, and a buffy unmarked breast resembling a sparrow with perpetual ‘bed-hair’ from the puffy tan cap on the back of the head and nape. Their preferred breeding habitat is wet meadow and lowland tallgrass prairie, much of which was drained and converted to row crop agriculture during the 20th century in Nebraska and throughout the Great Plains. These breeding habitat losses have contributed to population declines of 59% since 1970. 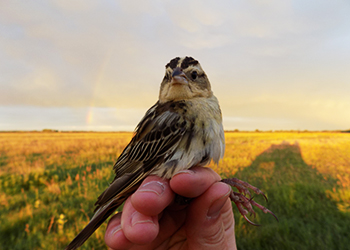 Where preferred breeding habitat has been eliminated, Bobolinks have begun nesting in agricultural fields, particularly alfalfa. The adjacent Mormon and Shoemaker Islands managed by the Crane Trust represent the largest expanse of lowland tallgrass prairie and wet meadow habitat remaining within the central Platte River Valley and Bobolinks are abundant here. South-central Nebraska marks the southern limit of the Bobolink’s contiguous breeding range which expands north throughout the Great Plains into central Canada. Bobolinks can be found breeding locally in appropriate areas of mesic tall grass as far west as British Columbia and as far east as Newfoundland. Bobolinks winter about 10,000 km (6,250 mi) south of their breeding range in the pampas grasslands and marshes of Bolivia, Paraguay, Brazil, and Argentina. However, they increasingly depend on rice and sorghum fields for forage on their wintering grounds as grasslands in South America are also being converted to cropland at high rates. Some South American farmers engage in control efforts to limit Bobolink use of their fields including the use of shotguns, poisons, and netting. Additionally, a number of potent pesticides (e.g. - monochrotophos) are commonly utilized on wintering range crops, particularly in Bolivia, which are known to be toxic to birds and are banned in North America.

Facing threats both in their breeding and wintering ranges, Bobolinks are a top priority for Crane Trust staff for study and conservation advocacy. We have been monitoring their populations through systematic surveys across Crane Trust properties in conjunction with vegetation survey and land management data since 2015 to better clarify the vegetation communities and land management practices that promote Bobolink nesting habitat. Additionally, we have been collecting demographic data on Bobolinks across a subset of sites utilizing mark-recapture techniques (mist netting) through our collaboration with The Institute for Bird Populations and their nationwide Monitoring Avian Productivity and Survivorship program. We collected field data from 2002-2007 and resumed ongoing field data collection in 2017. Using these data in statistical models, we are examining key demographic parameters such as reproductive success, recruitment, and survival. This in turn allows us to link specific demographic responses with our adaptive management activities so that we can improve the effectiveness of our conservation efforts.