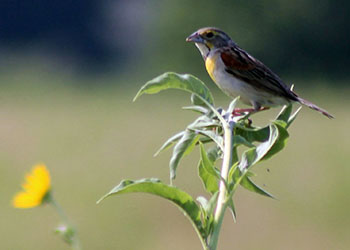 The Dickcissel (Spiza americana) is an iconic bird of Great Plains prairies and a Neotropical migrant that earned its name from its song. Its populations declined severely during the 1960’s and 1970’s; they have since stabilized, but have not recovered to earlier levels. Thus, Dickcissels remain a conservation priority species that contend with multiple human impacts; these include shooting, trapping, and poisoning by people in their wintering range in South America where they may be considered crop pests, and habitat loss and conversion on their breeding range in North America. Nomadic and somewhat elusive in some areas, Dickcissels remain abundant breeding birds at the Crane Trust, providing an ideal opportunity to investigate their responses to changing habitat, management, and climate. To this end, we are using mark-recapture data from 2002-2007 through our collaboration with The Institute for Bird Populations and their nationwide Monitoring Avian Productivity and Survivorship program, which we will compare with new data collected in 2017 and future years. We are using these and other data to investigate Dickcissels’ demographic responses to specific sites, grazing, patch burning, and climate variables such as temperature and precipitation. By continuing to collect and analyze new data on their populations, we will contribute to sound science and inform adaptive management efforts to keep this beautiful songster abundant on Crane Trust lands.