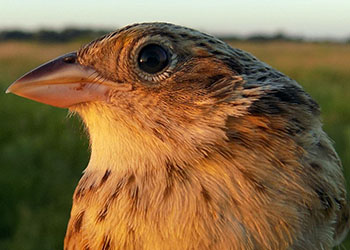 The Grasshopper Sparrow (Ammodramus savannarum) is a Neotropical migratory songbird that breeds in native grasslands in the US and Canada, but whose global population has declined 68% since 1970. Despite this alarming decline, Grasshopper Sparrows remain abundant breeding birds at the Crane Trust, providing an ideal opportunity to investigate their responses to changing habitat, management, and climate in the Great Plains. To this end, we are using mark-recapture data in statistical models to investigate Grasshopper Sparrows’ demographic responses to specific sites, grazing, patch burning, and climate variables such as temperature and precipitation. Through our collaboration with The Institute for Bird Populations and their nationwide Monitoring Avian Productivity and Survivorship program, we are comparing field data from 2002-2007 with new data collected in 2017 and future years, allowing us to gain a long-term perspective in how their populations change over time. Our findings so far indicate that management, including grazing and burning, benefits Grasshopper Sparrows, leading to abundance peaks approximately two years following these activities. We also found that climate variables, specifically changes in spring temperature and precipitation levels, have an even greater influence on their abundance than management activities. Between 2002 and 2007, Grasshopper Sparrow abundance increased with warming temperatures and decreased precipitation. From this response, it appears that ongoing climate change might benefit them in this part of their range, making these populations climate change “winners,” at least in the short-term. By continuing to collect and analyze new data on their populations, we can test whether this prediction bears out and continue to use sound science to improve our conservation efforts for Grasshopper Sparrows on Crane Trust lands.