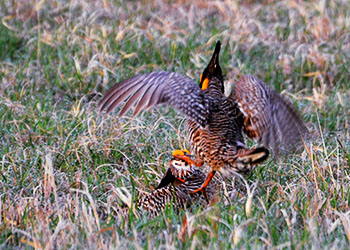 The Greater Prairie-chicken is a charismatic bird in the grouse family (Tetraonidae) that inhabits prairies in central North America. It was once widespread in North America, ranging from central Canada to Texas, including three distinct subspecies: the Heath Hen (Tympanuchus cupido cupido) which once inhabited the eastern U.S. but has been extinct for over 80 years, the Attwater’s Prairie-chicken (T. c. attwateri) which persists only in costal Texas, and the most widespread of the three subspecies the Interior Greater Prairie-chicken (T. c. pinnatus). The range of the interior Greater Prairie-chicken has shifted a great deal under the influence of human land use patterns. It originally occurred in moister tallgrass prairies and oak savannas from southern Ohio to southeastern South Dakota and from parts of northern Tennessee to south-central Texas. Oak woodlands likely provided an important winter food source for the Greater Prairie-chickens in these areas. As small areas of prairie were converted to agriculture during early settlement of the Great Plains, they expanded their range moving north into southern Canada and west throughout the Dakotas, Nebraska, and Kansas and into eastern Wyoming and Colorado where small croplands provided winter forage. Greater Prairie-chickens likely peaked in numbers on their acquired range when cropland constituted between 20% and 30% of the landscape at large. Starting roughly in the 1930s agriculture became more intensive and Greater Prairie-chickens began to decline rapidly in large areas of their original and acquired ranges. Today, populations are relatively secure in north-central Nebraska, south central South Dakota, and eastern Kansas. Small remnant and reintroduced populations still exist in at least 7 other states, but these remain isolated and vulnerable to extirpation (less than 2,000 individuals, aside from Colorado). Greater Prairie-chickens are highly sensitive to habitat fragmentation and breeding populations are not generally supported by prairies of under 75 hectares or 185 acres. The major factors influencing this decline are the ever increasing size and mechanization of farms and the sprawl of urban development. 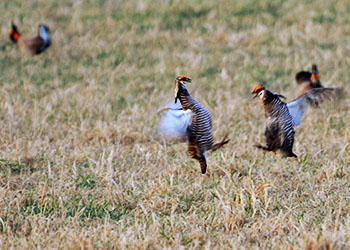 Greater Prairie-chickens form leks where males gather to display before and during the breeding season. Leks are hotbeds of social activity and eventually breeding for the Greater Prairie-chickens. Greater Prairie-chickens are said to “boom” as the deep calls made by lekking males are drum-like in nature. These calls are made utilizing the brightly colored orange air sacks on their necks (apteria) that inflate and deflate as they call. They are also known for their dancing; males bend forward positioning their bodies parallel to the ground with their wings to their sides, and then perform a rapid quickstep sometimes called “strutting.” As they strut they also extend their pinnae (moveable neck feathers that cover their apteria) into the air like horns.  Males charge each other, often jumping into the air and sparring utilizing a talon first attack. They do this to establish a position within the lek, which is a social hierarchy for the purposes of mating. Female Greater Prairie-chickens begin attending the lek and mating a few weeks after males begin displaying and have generally established their social hierarchy. Females tend to walk through the center of the lek before mating with dominant males that defend a position there; younger and less healthy males are positioned toward the lek’s perimeter. The dominant couple of males in a given lek will likely mate about 90% of the females. This polygynous mating structure compounds genetic conservation concerns regarding isolated Greater Prairie-chicken populations as the limited number of breeding males creates a smaller effective than actual population from a genetic diversity perspective.

Greater Prairie-chickens require a mixture of habitats created by natural prairie disturbances such as fire and grazing as well agricultural grains for winter survival within their acquired range. Lek sites generally provide a balance of visibility to female Prairie-chickens, adjacent escape cover to hide from predators. Additionally, lekking sites are located in close proximity to multiple female home ranges, which include tall ungrazed vegetation for nesting and a diversity of more open habitats for brood rearing. Leks are commonly found on higher portions of the landscape that are defoliated from recent grazing or burning, providing maximum visibility. Though lekking Greater Prairie-chickens are exposed on their booming grounds they probably have an increased chance of detecting incoming predators as a group. Greater Prairie-chickens are considered non-migratory but movements of 40 to 50 km are regularly observed as foraging patterns change during the winter. They survive the harsh prairie winters of Nebraska utilizing their enlarged crops and gizzards to digest large quantities of low quality forage (leaves and sticks, etc.) as well as waste corn where available. They also have the ability to burrow under the snow and wait out tough weather. Males generally begin lekking in Nebraska in the first couple weeks of March. However, they have been recorded displaying regionally as early as the beginning of February during extended periods of above average winter temperatures. Peak lek attendance for both males and females generally occurs in early to mid-April and lekking behavior and mating can be observed continuing into mid-May or later in Nebraska. Nesting generally occurs in May and early June. The largest population of Greater Prairie-chickens in Nebraska, and arguably North America, resides in the Nebraska Sandhills. The Greater Prairie-chickens on Mormon Island represent a relatively isolated population in the central Platte River Valley, approximately 40 km southeast of the nearest regular lekking grounds on the edge of the Sandhills. We continue to study this Greater Prairie-chicken population to gain insight into its stability and well as the dynamics broadly facing a relatively isolated breeding population.