With a weight of approximately 1 ounce and a length of approximately 9 inches, the interior least tern is the smallest of the gull and tern family. Males and females appear identical with a black crown, white forehead, gray back, gray wings above with white below, orange legs, and a black-tipped yellow bill. Immature birds have darker feathers, a dark bill, and dark eye stripes on their white heads. 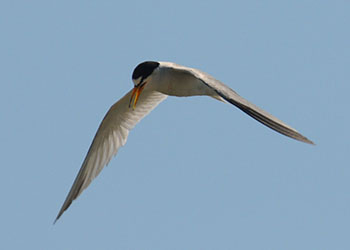 The interior least tern arrives on its breeding grounds in Nebraska and other Midwestern states in early May to nest in small groups. They form their nests by scraping indentations in sandbars and gravel beaches. These nests may be lined sparingly with small shells or other debris. Eggs are commonly laid in clutches of 2 to 3 from late May through early August, and are incubated for about 20 days. The young fledge in 19 to 20 days. Nesting success depends on the presence of bare or nearly barren sandbars, favorable water levels during nesting, and abundant food. Interior least terns feed mostly on small fish caught by skimming the surface of the water or by making dives from the air. Least terns are very defensive and adults scream, dive, and sometimes defecate on intruders. By late August or early September, they migrate south to wintering grounds along the Gulf of Mexico. Interior least terns may live up to 21 years. 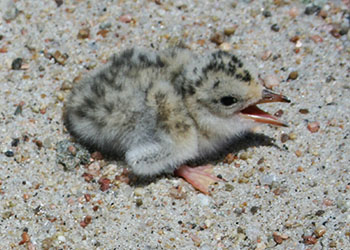