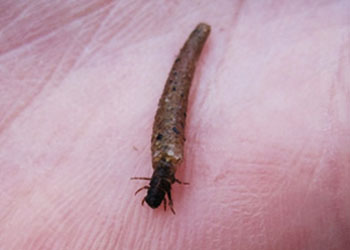 Caddisflies are semi-aquatic insects that comprise the insect order Tricoptera, which is closely related to the butterfly and moth order (Lepidoptera). As larvae and pupae, they generally live underwater and emerge periodically as a species en masse as winged adults between summer and early-fall (also known as a “hatch”). These insects are an important food source for fish and are readily consumed as adults by birds, bats, and amphibians. Caddisflies are best known by anglers for inspiring fishing flies and for the cases many make to protect and camouflage them during their larval stage. The cases (often tubular-shape) are made by cementing granules of sand together with secreted silk and have been incorporated into jewelry by replacing the sand with bits of gold or polished rocks. The silk cases are mobile and necessary to protect them during the larval stage, which comprises most of the caddisfly lifecycle.

Caddisflies spend close to a year as larvae, foraging on decomposing plant material in freshwater streams, lakes, ponds, and even temporary water bodies. The winged adults rarely feed, living only a few weeks after pupation to breed and lay eggs exclusively, dying off with the onset of colder temperatures. Eggs are usually deposited on the vegetation bordering waters or on the water surface, where the larvae hatch to begin the cycle over again.

In 1997, a new caddisfly species was incidentally discovered during an amphibian survey in a Crane Trust slough on Mormon Island. The species was smaller, lighter in color, and had more pronounced wing spotting than other caddisflies in the region. These differences justified a more in-depth examination, where an array of physical features provided further evidence that a new species had been discovered. In 2000, these findings were published and the species was officially named the Platte River Caddisfly (PRCF). Between 1999 and 2004, researchers explored wet meadow sloughs along the Platte River and found 8 PRCF locations in a 60 mile stretch of the Big Bend. In 2004 PRFC was not found at all on the Crane Trust property and another location was completely devoid of slough water. In 2007 WildEarth Guardians issued a petition to the USFWS to list the PRCF as an endangered or threatened species and critical habitat protection was justified due to its apparently limited distribution in vanishing wet meadow systems. The USFWS funded a 12 month investigation in 2011 to evaluate the PRCF range, biology, abundance, and threats to determine if federal protection of the species was warranted.

Expanded surveys of Nebraska sloughs found the PRCF also occurred in backwater sloughs of the Loup and Elkhorn Rivers, therefore have a much wider distribution than initial reports indicated. Investigations into the PRCF life history provided suggested that the species has very important adaptations evolved to cope with heavily fluctuating water levels and drought conditions. The water in PRCF inhabited sloughs is entirely dependent on water from their adjacent rivers. Variability in river water levels throughout the year brings about dramatic changes in water chemistry, to which the PRCF seems to be well adapted to tolerate. This trait is unique to many other caddisfly species, which are much less tolerant of chemical instability compared to conspecifics studied in similar aquatic systems. The growing and molting strategy of PRCF also contrasted other closely related species. While other species hatch quickly for larvae to consume, grow, and molt rapidly before the onset of winter, PRCF hatch much later and larvae will not grow and molt until the beginning of spring. Delayed hatching would help ensure the presence of slough water and is closely associated with the fall increase of water flows customary to the Platte River.

A final report was issued to the USFWS in 2012 and the PRCF was officially denied federal protection. Though the species was almost certainly more abundant before Nebraska’s wet meadow landscapes and river hydrology were altered, it has evolved to survive periods of low water levels and is seemingly more resilient to pressures of a changing environment. This investigation was followed by several other studies corroborating the PRCF as an essential factor in Nebraska’s wet meadow slough ecology, both as an abundant local food resource and as decomposers of slough organic matter. The Crane Trust recognizes the significant role the PRCF plays in Nebraska’s sloughs and will continue to manage and protect the wet meadows on Mormon Island to safeguard its future.