Each spring, more than 500,000 sandhill cranes gather in the Platte River valley during their northward migration. Sandhill cranes have been making this migration annually for thousands of years, and fossil beds in several parts of Nebraska contain the remains of prehistoric cranes from 10 million years ago. 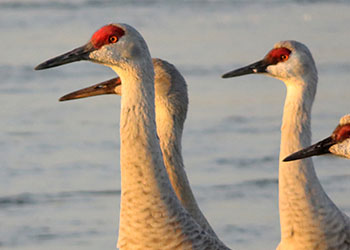 Sandhill cranes migrate in individual family groups, but here at the Platte, the birds are social and gregarious, and numerous families gather into large groups while feeding and resting. A single meadow may contain as many as 100,000 birds. The cranes begin arriving at the Platte by mid-February and spend four to six weeks here each spring. The number of cranes peaks during the last half of March, though some birds remain on the Platte until mid April.

While on the Platte, cranes spend their days in the fields and meadows near the river, feeding on waste corn in crop fields and a variety invertebrates and plant tubers in wet meadows and grasslands. The cranes build up their body fat reserves, increasing their weight by 15 to 20 percent during their time here. They obtain the vast majority of their energy from corn (96 percent), but corn is not a complete diet. The sandhill cranes also need specific mineral nutrients and proteins for successful egg laying and reproduction, and animal prey—primarily snails, earthworms and insects—provides those essential nutrients. Animal prey is a minor portion of the cranes’ total caloric intake (4 percent), but it is critical that the birds get these nutrients for successful reproduction, so they spend almost half of their time searching for this part of their diet in the grasslands, wetlands and alfalfa fields along the Platte.

Late in the afternoon, sandhill cranes gather next to the Platte. As dusk approaches, they fly to the river and roost where shallow water covers the sandbars in the middle of channels. The wide, open, braided channels of the Platte provide ideal roost sites for the large concentrations of sandhill cranes—at the height of the migration, 50,000 to 100,000 cranes will pack into the most heavily used reaches in concentrations as high as 10,000 birds per half mile of river. The noise from so many birds calling is deafening, and some people liken it to being in a crowded football stadium. The cranes quiet somewhat when they go to sleep. At dawn, they awaken and disperse again to nearby feeding areas.

The Platte River region provides the combination of habitat components in close proximity to each other that the sandhill cranes need: crop fields with an abundant supply of food, wetlands and grasslands that provide critical nutrients, and secure roosting sites. The cranes are censused annually while they are here, and the mid-continent population has been stable or increasing during the past ten years. Recruitment into the population is approximately balanced by mortality due to hunting and other causes. During the fall, sandhill cranes are hunted in most states and provinces along their migration route except Nebraska.