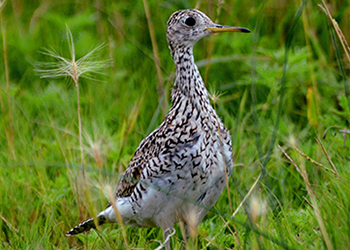 The Upland Sandpiper (Bartramia longicauda) is a unique shorebird in this region that is often spotted resting atop fence posts in the early spring as it displays to attract mates. Its call is a distinctive whirling whistle that can be heard at distances well over a kilometer on a calm day. As its name suggests, this atypical shorebird does not require open water in the core of its breeding territory. However, it does require variable vegetation heights within a large breeding territory. This means that they tend to be attracted to areas where recent management has taken place adjacent to more untouched areas. For example, a heavily grazed ridge near an area with tall uncropped vegetation. In many regions, especially prairies east of the Mississippi River, this species is declining. Upland Sandpipers are listed as a species of concern in 22 states and Canadian provinces. However, Nebraska has the third highest relative abundance of Upland Sandpipers, and double the relative abundance found across the United States on the Breeding Bird Survey (10.39 in Nebraska, 4.72 for the U.S.A.). The unique habitat requirements, as well as its decline through much of its range, have made this a target species both for prairie management as well as scientific research. Therefore, the Crane Trust has ongoing efforts to monitor this species and provide useful habitat information to assist those populations outside of Nebraska that are declining relatively quickly. The primary reason for the decline of this species is directly associated with its relatively large territorial requirements and it is highly impacted by the continuing conversion of prairie to agriculture. Restoration efforts in these areas will be most effective in recovering the at-risk populations, especially when guided by habitat requirements determined in areas with stable populations of this species.