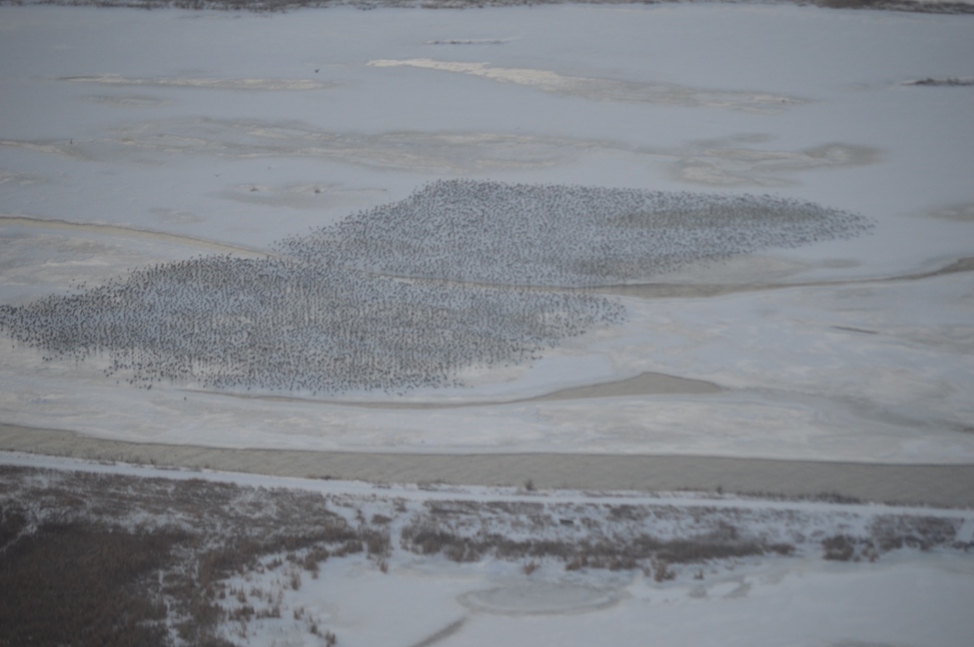 Today we counted 17,080 Sandhill Cranes, but we did not get a reliable error estimate because all the birds were detected in a scattering just east of Alda Road with many in the air and most in a hayed field. In any case, this data suggests that the abundance of cranes in the Central Platte River Valley has not changed over the last week. Counts during survey week three (26 February to 04 March) ranged widely from just over 4,000 to just under 200,000 Sandhill Cranes in our 2002 to 2019 database. The average from 2002 to 2018 was just under 41,000 Sandhill Cranes for this time period. However, this varied widely from the earlier part of our database beginning in 2002 to more recent years. For example, from 2002 to 2007 the average count for survey week three was 8,200 with a standard deviation of 3,400 (pretty consistent), but from 2013 to 2018 the average was 58,100 with a standard deviation of 72,300 (wide variation). This demonstrates that in recent years there have both been generally larger counts at this time of year as well as higher overall variation than in our earlier records. In this way, this year’s migration is not aberrant “taking a long view”, but differs greatly from the migrations in 2016 and 2017 when large numbers of birds had arrived by late February. We have noted a number of strange behaviors including cranes lying down on the ice at roost sites (we watched to make sure they got up), which suggest the cold weather may be impacting them. We have kept records of their foraging behavior in the last week via scan samples taken every 3 minutes of observation. We noted that Sandhill Cranes were feeding about 38% (SD = 29%) of the time (n= 25 scans (~75 min.)). This is not markedly different from published diurnal activity budgets in the Central Platte River Valley (35- 50% depending on habitat type, Krapu et al. 1984; 42%, Sparling and Krapu 1994). It is notable that they are foraging, but it is challenging to discern how the 4 plus inches of snow on many fields, or for that matter the frozen ground, is impacting their foraging success. In addition to waste corn, Sandhill Cranes in the Central Platte River Valley subsist on macroinvertebrates such as scarab beetles and earthworms (Davis and Vohs 1993), which are likely of reduced accessibility at the moment because of the frozen ground. We will keep you updated as the migration progresses.

Davis, C.A., and P.A. Vohs. 1993. Role of macroinvertebrates in spring diet and habitat use of Sandhill Cranes. Transactions of the Nebraska Academy of Sciences 20:81-86.