Each year in early February the Crane Trust begins its aerial surveys of sandhill cranes along the Big Bend reach of the Platte River, continuing a long-term monitoring project that began in 1998. 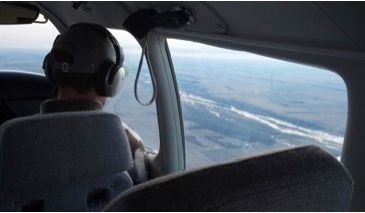 The survey covers an 80-mile stretch of the Platte River from Overton, Nebraska, on the western edge of the primary staging area for sandhill cranes, to Chapman, Nebraska, which approximates the eastern edge.

Once a week members of the survey team fly the 80-mile route at dawn to visually estimate and record the number and location of sandhill cranes roosting on the river. Because not all sandhill cranes are in Nebraska at any one time, let alone the confines of the Platte River, these surveys provide an index of crane use and migration timing from year to year, and not the actual population. Surveys have been made possible with the aid of Grand Island resident/pilot Lonnie Logan, who has generously volunteered his time and private airplane to support the effort since 2012. 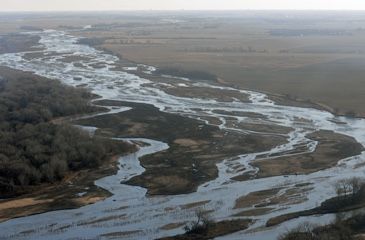 The roosts along the eastern portion of the route—notably the Alda roost south of Crane Trust headquarters—often contains the highest densities of birds during the first month of the migration. Importantly, this is a region of the river that the Crane Trust has managed intensively by clearing vegetation from the active river channel. From both ground and aerial observations, this habitat improvement has had a positive impact on crane utilization of this portion of the river.

While particular stretches of the river between Grand Island and Kearney are traditionally favored by sandhill cranes, day-to-day use of the channel varies, depending on several factors. Shortly after water levels recede many sandbars are exposed and birds are found in loose congregations. In contrast, when water levels are high or when cold, windy weather threatens, the cranes are often tightly packed on the most favorable roosts and in protected pockets on the river. 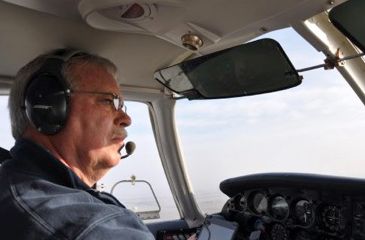 These ongoing roost surveys are an important component of the Crane Trust’s monitoring program, enabling the Trust and other conservation partners to better assess and understand the effects of different habitat management practices on cranes at this critical stage in their annual migration. The surveys continue into mid-April when most cranes will have left the river to continue their migration to breeding grounds in the north.

The objective of this research is to understand how wet meadows and the Platte River serve sandhill cranes staging in the Central Platte River Valley during spring. Thousands of images have been captured and analyzed to determine how sandhill cranes interact and obtain resources while in Nebraska. The images we have acquired allow us to see cranes as they’ve never been seen before and are both fascinating and educational. The Crane Trust is currently studying images to summarize findings and learn how new technology can be applied to studies of animal behavior. This material has been formatted to serve as an outreach tool to help the public understand just how special Platte River habitat is to migratory birds, and to offer a glimpse of the untold beauty made possible by Crane Trust lands.