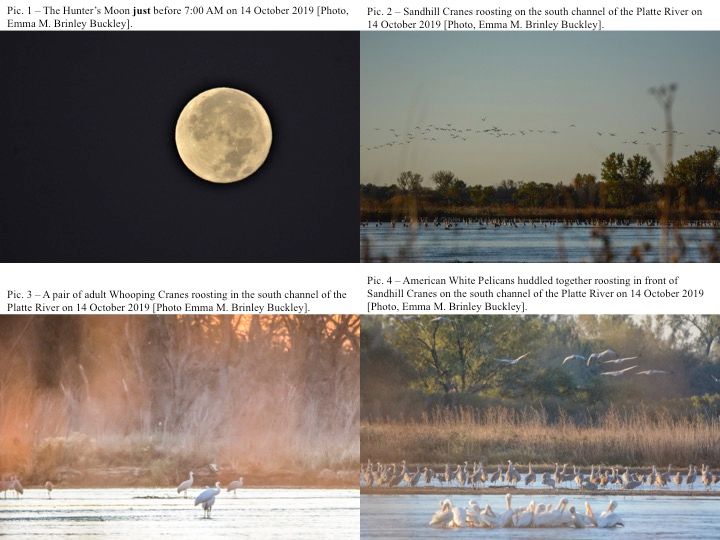 On October 13th, during the late afternoon and early evening, we began to hear large numbers of Sandhill Cranes flying overhead as the full “Hunter's Moon” rose in the darkening sky (Pic. 1). Generally, in the fall, Sandhill Cranes simply pass over the Central Platte River Valley (CPRV), or stop in relatively small flocks of about 20 to 100 birds for a night or two. This is very different than the massive gathering of over 600,000 birds that occurs here in the spring. Several Sandhill Crane breeding affiliations, particularly those that breed and winter west of the CPRV, fly slightly out of their way to reach the staging grounds here in the spring. In the fall, these cranes often take a more direct route south toward their wintering grounds in Texas, New Mexico, and northern Mexico, crossing our latitude further west in Nebraska or even eastern Colorado. However, inclement weather including well below average temperatures and heavy snowfall recently arrived in the northern Great Plains, with daily average temperatures hovering below freezing (<32 °F, <0 °C) in Regina, Saskatchewan, and Bismarck, North Dakota, from October 10th through the 13th and daily average temperatures sticking around freezing in Pierre, South Dakota, during the same time period.

As of October 13th , 17 inches of snow had fallen in Bismarck and about 5 inches through much of South Dakota. Emma Brinley Buckley and I woke early in the morning on October 14th to visit the river as the sun rose and see what bird life had arrived. To our surprise we counted more than 10,000 Sandhill Cranes, more than I have seen on the river in the fall at one time (Pic. 2). To our excitement there were also two healthy adult Whooping Cranes roosting with them, the first we have seen on the river this fall (Pic. 3). We also noted a host of other recently arrived migrants including White-crowned Sparrows, Pied-billed Grebes, and American White Pelicans (Pic. 4). Though here in significant numbers at the moment, we don’t expect to see Sandhill Cranes in the CPRV for any  longer than normal this fall, but keep your eyes to the skies, a variety of birds are passing though at the moment.
[Photo Credits - Emma M. Brinley Buckley]