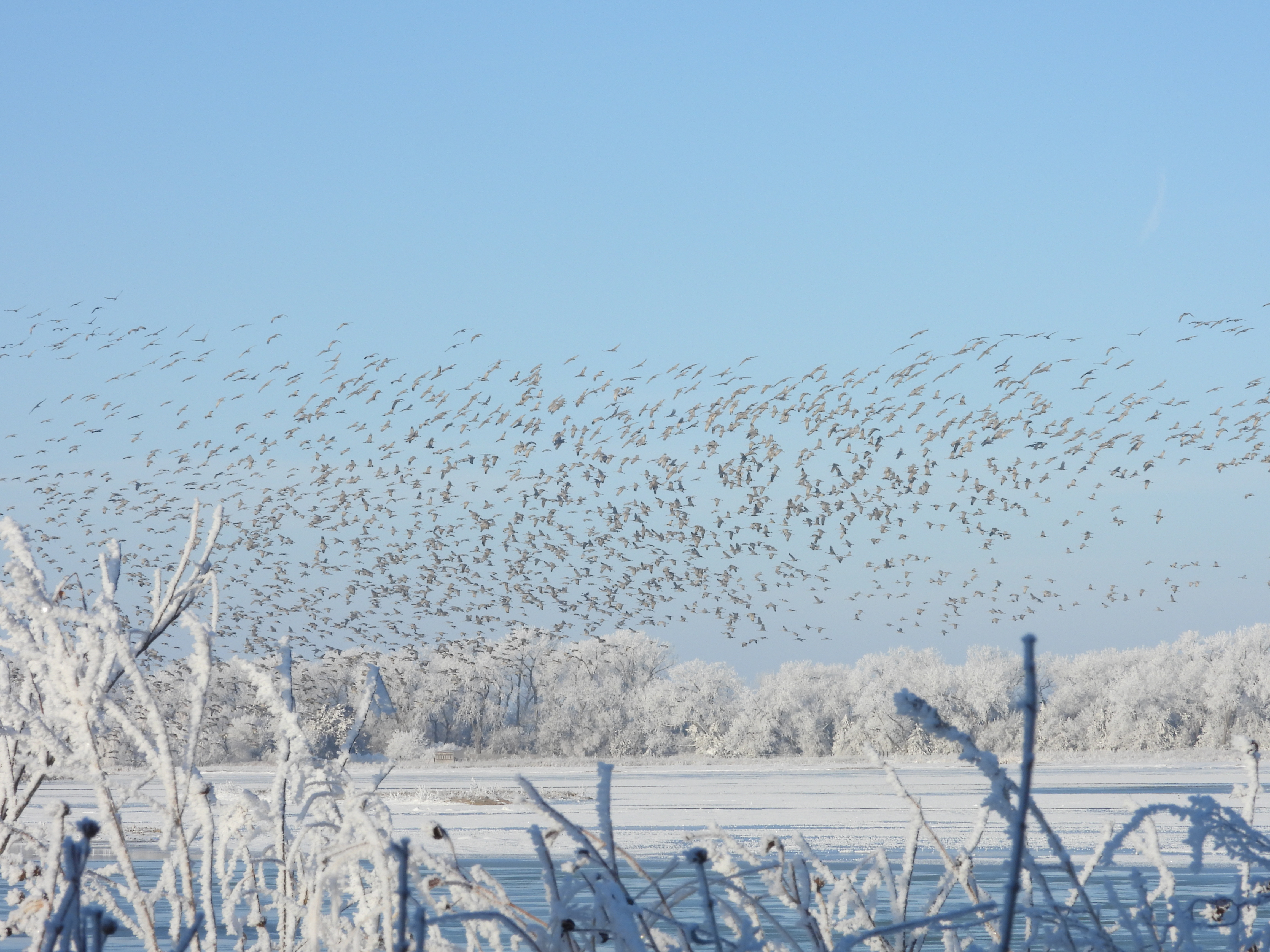 Today (2-22-21) we counted 4,600+/-Sandhill Cranes in one roost near TNC's Dahms Tract, south of Wood River, NE. This location is pretty far west for a large Sandhill Crane roost to occur this early in the spring migration considering our data from the last half decade. We counted a very similar number of Sandhill Cranes (4,300+/-1,250) during the previous week’s survey on 2-15-21, but the birds were spread out across 5 smaller flocks (range 60-1,800 individuals) between Grand Island (HWY 281) and Shelton, Nebraska (survey bridge segments 3-5). We also counted 5,740 dark geese (Canada Geese, Cackling Geese, etc.) and 37 Bald Eagles during this morning's aerial survey between Chapman (segment 1) and Overton (segment 11), NE. In contrast to Sandhill Crane abundance estimates, Bald Eagles and dark geese increased notably over last week’s counts which totaled 2,030 and 3, respectively. Most birds were west of Alda road during today’s survey (survey segment 4 and west). Places where the channel is widest and shallowest (Rowe Sanctuary – seg. 7, Mormon Island – seg. 3, etc.) remained mostly frozen and largely devoid of significant groups of waterbirds. The weather will be improving for us this week with temperatures returning to near normal levels. Daily high temperatures have averaged between 42°F and 44°F from February 22nd to 28th during the last 40 years in the Central Platte River Valley (CPRV), NE, while minimums have averaged between 22°F and 23°F (Data from Hastings Municipal Airport, High Plains Regional Climate Center, NOAA). Average lows will be exceeded while average highs will reached or exceeded for the majority of the coming week. Winds currently look most favorable for migration on Friday 2-26-21. It is uncertain if shifts in weather conditions on the wintering grounds and more southerly stopover locations (e.g., Quivira NWR) will be sufficient to urge some Sandhill Cranes north this week. However, increasing temperatures will undoubtedly make the ~4,600 cranes that have been here for several weeks or longer (i.e., all winter) a little more comfortable.

Sandhill Cranes tend to arrive in the CPRV in detectable numbers by mid-February. However, we had many winter detections despite periodically below average temperatures and above average snowfall in late 2020 and early 2021. From ground counts on February 3rd 2021 we estimated ~2,750 Sandhill Cranes were roosting on the Platte River at two separate locations within 3 miles of each other (survey segments 3 and 4, respectively). Similarly, we documented ~2,500 Sandhill Cranes on 7 January, ~1,300 on 11 January 2021, and smaller flocks on 18 December 2020 in the same general area. Additionally, we received reports from biologists and/or birdwatchers that observed Sandhill Cranes flying overhead near the mainstem Platte River west of Shelton on 2-02-21, near Minden on 2-03-21 (~110 cranes), and above Clear Creek Wildlife Management Area on the North Platte River west of Lake McConaughy on 1-14-21 (~18 cranes). Research from the Crane Trust and partners suggests that drought conditions on major Sandhill Crane wintering grounds are associated with earlier arrivals to the CPRV (Harner et al. 2015. The Wilson Journal of Ornithology 127:457-466, Caven et al. 2019. Monographs of the Western North American Naturalist 11:33-76). Additionally, the increased availability of waste grain has been associated with northerly shifts in the wintering distributions of cranes globally (e.g., Prange. 2012. Proceedings of the Cranes, Agriculture and Climate Change Workshop). Interestingly, there is indeed drought conditions throughout their wintering range at the moment (https://droughtmonitor.unl.edu/). Conditions on the wintering grounds may partially explain notable Sandhill Crane winter occurrences in central Nebraska.