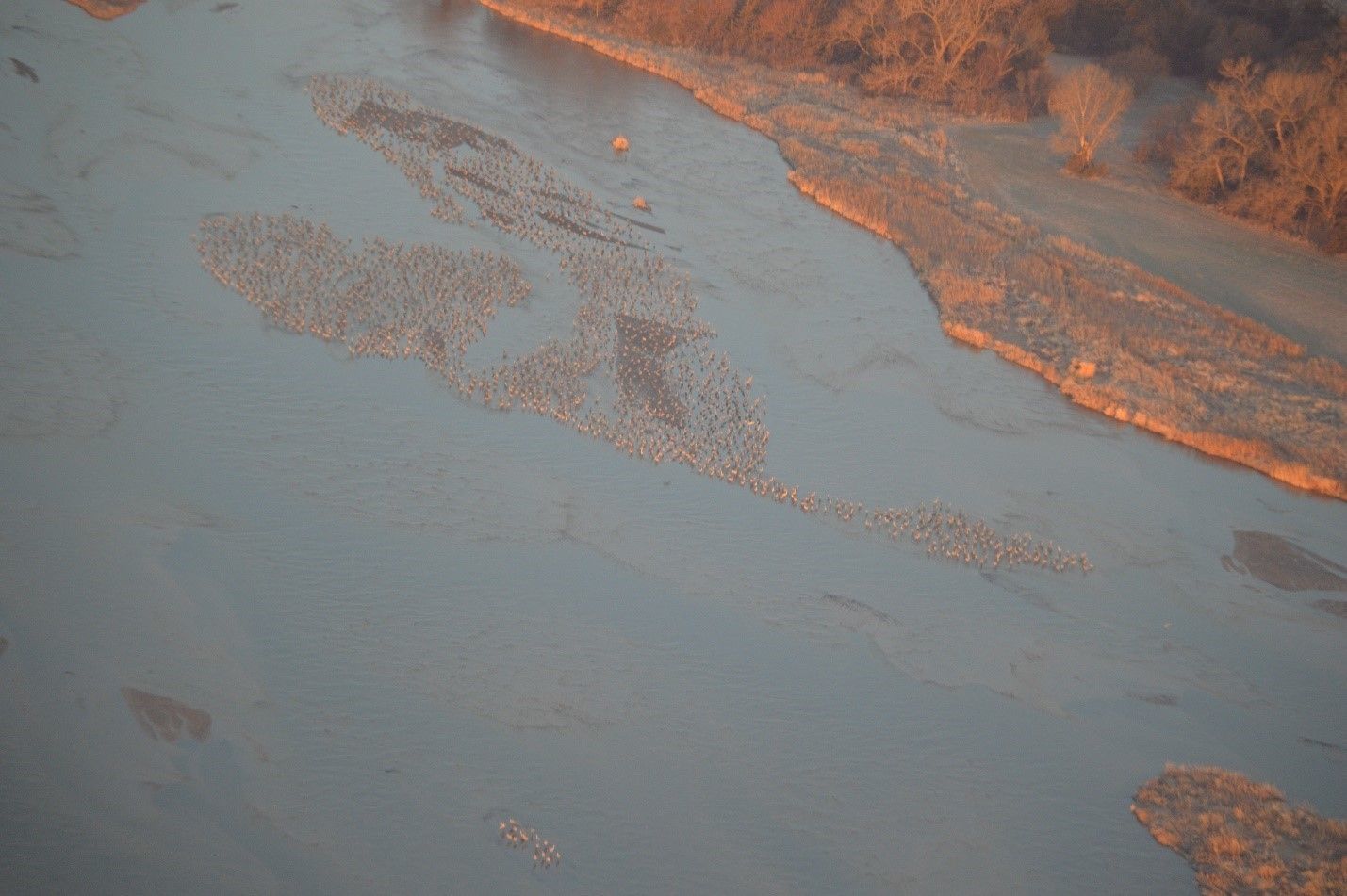 We conducted our 5th count of the year on Friday 19 March. However, we actually missed survey week 5 due to weather and this count therefore represents week 6 in our database. We counted 574,000+/-153,000 Sandhill Cranes in the Central Platte River Valley (CPRV) between Chapman and Overton, Nebraska. However, as I regularly mention, our method represents a systematic undercount as we do not count all the places cranes can be. Despite a relatively high count, conditions in the CPRV may have exacerbated the degree to which we underestimated Sandhill Crane abundance per our survey methods this week. We tend to detected flocks within 3 km of the main channel of the Platte River and cranes “further afield” than this are generally not observed. However, in route to our survey starting point for this week at Chapman, we noted >10,000 Sandhill Cranes roosting in flooded temporary wetlands >10 km south of the Platte River. As it rained for a significant period of time during three consecutive days last week (3/13/21, 2.9 in.; 3/14/21, 1.8 in.; 3/15/21, <0.1 in), seasonal and temporary wetlands became flooded and river discharge and stage increased beyond levels that Sandhill Cranes typically tolerate for roosting. The river crested at >5.25 ft stage height and >6,000 cubic feet per second (cfs) discharge on 15 March. Past observations indicate that a significant number of cranes forgo roosting within the river in favor of other shallow wetlands when discharge exceeds ~3,500 cfs. Cranes abandoned all but the widest and shallowest channels on the Platte River as of 15 March and continued to roost predominantly in off-channel habitats through the evening of 17 March. As of dusk on 18 March, some temporary wetlands had begun to dry up and river flows had decreased to a more seasonally typical 3,000 cfs. However, not all cranes had returned to the river. Throughout their range they use shallow palustrine wetlands, and may actually prefer them to riverine environments. Although the river was appropriate for evening roosting as of 18 March, many groups elected to remain in off-channel wetlands. The fact that we counted well over half a million Sandhill Cranes in the CPRV despite many flocks being outside of our survey area indicates that we may have been at peak Sandhill Crane abundance as of ~19 March. With warm temps (daily temps >9 F above average) and winds out of the south on 20 and 21 March, some Sandhill Cranes likely departed toward the north over this past weekend. I noticed a significant number kettling up to test the thermals Sunday (3/21) afternoon in particular. Flows had begun to stabilize at ~2,600 cfs yesterday (3/21) but heavy rain is again expected today (3/22) through tomorrow (3/23) and may total >4.5 inches. We would expect another similar (or larger) increase in river discharge following this rain event and therefore river flows may be high through the end of the week or longer. High water events generally bring many invertebrates to the surface, in particular earth worms, that Sandhill Cranes will consume heavily when they are available, so keep your eyes on prairies, meadows, and palustrine wetlands over the next week as you search for concentrations of cranes in the CPRV.