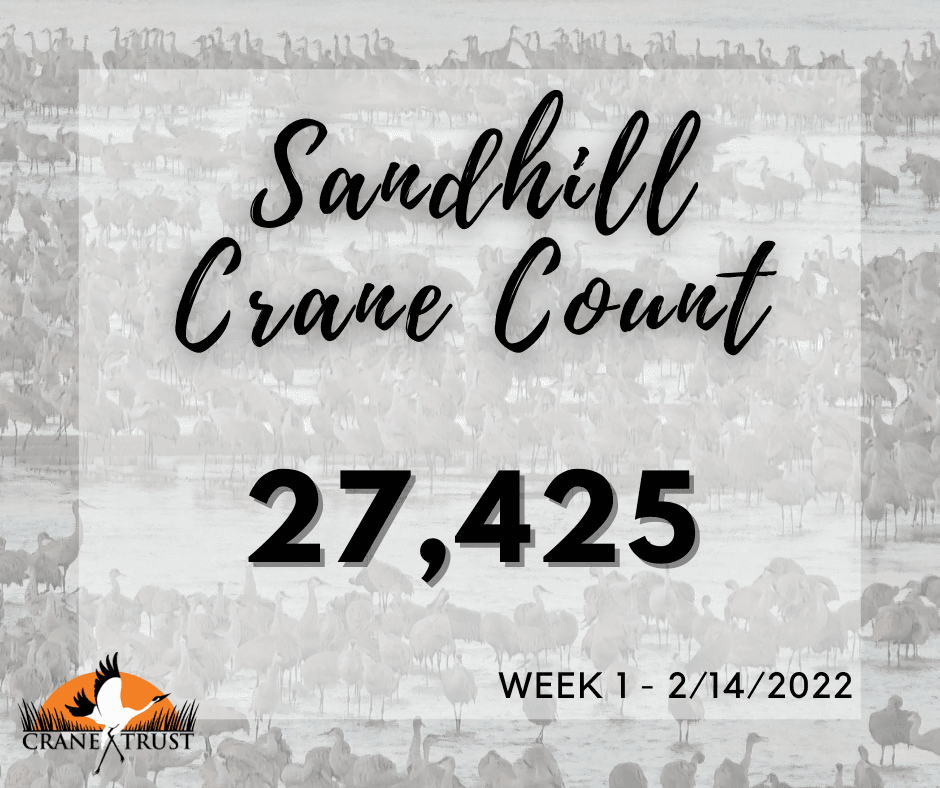 On February 14th, 2022, we counted an estimated 27,425±645 Sandhill Cranes in the CPRV. We also documented 23,240 “dark geese” including Canada Geese, Cackling Geese, and Greater White-fronted Geese as well as 73 Trumpeter Swans, and 7 Bald Eagles. This represents one of the highest week-one Sandhill Crane counts recorded in our >20-year database. On average, we tend to count between 4,000 and 8,000 Sandhill Cranes during the first survey, which always falls near Valentine’s Day. In years where we have observed well above average counts during the first two survey weeks we have occasionally observed upwards of ~200,000 Sandhill Cranes before the end of February and peak migration within the first half of March. A good example year is 2016, when we observed 82,100±6,900 Sandhill Cranes on 23 February (survey week 2) and 213,600±10,800 on 29 February just 1 week later. However, a sustained cold snap throughout the Great Plains could still significantly slow migration. Research by the Crane Trust suggests that above average temperatures and drought conditions on the wintering grounds are predictive of arrival dates for Sandhill Cranes to the CPRV. Our research indicates that just a 1 unit increase in mean winter temperature or a 1 unit change in the Palmer Drought Severity Index in key wintering regions is associated with tens of thousands of Sandhill Cranes arriving earlier in migration. Texas and New Mexico, which host a plurality of wintering sites for the midcontinental population, are currently experiencing moderate, severe, and extreme drought over much of their respective states. Additionally, the current 10-day weather forecast suggests that we will have well above average temperatures over the coming weekend, topping 60 in the CPRV on Saturday (2-19-22) and Sunday (2-20-22), with relatively strong winds out of the south Saturday afternoon. Conditions across much of the wintering grounds are also expected to be warm over the weekend with winds out of the south or southwest. Therefore, we could expect some new arrivals before next count. However, the 10-day forecast also suggests a cold snap during the following week with Tuesday (2-22-22) having a predicted high of 19 and a low of -1. So, we are off to a fast start, but whether or not we sustain this quick migration pace may depend on weather conditions not only in the CPRV but also in the southern Great Plains. 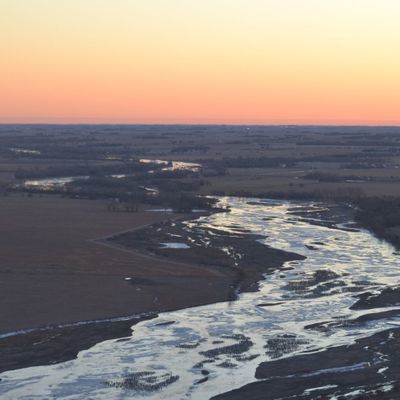 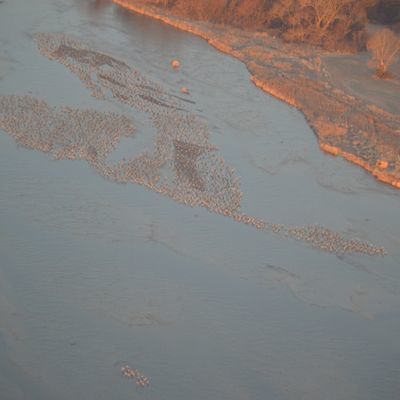 The Crane Trust has been conducting aerial surveys of the Central Platte River Valley (CPRV) between Chapman and Overton (82 mi.), Nebraska, since 1998. Surveys are flown for approximately 10 weeks depending on weather conditions between mid-February and mid-April. Surveys begin at civil twilight, which is about 30 minutes before sunrise, and take between 50 minutes and 1 hour and 15 minutes to complete. Birds are visually counted from the air by one biologist while another records data and marks the locations of roosts with a Global Positioning System (GPS). Visual counts are bias corrected based on aerial photos from a subset of surveyed roosts. Our flight path follows the main (generally south) channel of the Platte River and we count all the birds that we can see in the main channel, visible side channels, and adjacent meadows and fields. Our study does not specify a detection limit, but we tend to document Sandhill Cranes within about 3 km of the main channel of the Platte River. We also conduct counts of other species of waterbirds early in migration as well as later in migration when Sandhill Crane numbers are lower. We count dark geese (Canada Geese, Cackling Geese, and Greater White-fronted Geese), Trumpeter Swans, and Bald Eagles during the first 2-3 weeks of migration and American White Pelicans and Whooping Cranes during the last 2-3 weeks of migrations depending on Sandhill Crane numbers and conditions.

We have learned a great deal from these surveys. Namely, Sandhill Cranes are increasing in abundance, coming earlier, staying longer, and shifting east within the CPRV. Additionally, they are increasing in density where large expanses of herbaceous lowland prairie and wet meadow habitat remain adjacent to the Platte River. Meadow-prairie landscapes are predominantly protected by conservation organizations in the CPRV including the Crane Trust, Audubon Nebraska, and The Nature Conservancy. Though most (80-85%) of the Sandhill Cranes that migrate through Nebraska use the CPRV, a sizeable portion also use the North Platte River Valley (NPRV; >15%). Other organizations have also conducted aerial surveys of Sandhill Cranes in the region but employed different methods to achieve distinct objectives and also surveyed slightly different areas. The Rainwater Basin Joint Venture (RWBJV), along with several partners, conducted a Sandhill Crane survey of the NPRV as well as Birdwood Creek from 2014 to 2016. Additionally, the U.S. Fish and Wildlife Service (USFWS) conducts a once-annual survey of both the CPRV and NPRV on the 4th Tuesday of March, near the estimated peak of migration, to monitor the Midcontinental Sandhill Crane Population.

The Crane Trust’s survey program is sensitive to changes in spaces-use (i.e., movement east) and migration chronology over time, but given it does not cover all the locations that Sandhill Cranes occur, it provides a systematic underestimate of abundance. By contrast, the USFWS’s method, which includes a robust survey of most Sandhill Crane use areas, more accurately estimates abundance but suffers from extreme interannual variation because it is often conducted outside of peak migration timing, which varies substantially across years. The highest Sandhill Crane abundance recorded in the CPRV per the Crane Trust’s survey method was 659,900±61,400 in 2019 while the highest count per the USFWS database was 1,005,600±105,800 across both the CPRV and NPRV in 2018. We recently combined the USFWS, Crane Trust, and RWBJV datasets and used the strengths of each to account for the others’ weaknesses through a statistical modelling approach. We estimated that at the peak of migration in both 2018 and 2019 there were about 1.27 million Sandhill Cranes in Nebraska with approximately 220,000 in the NPRV and 1,050,000 in the CPRV.

If you are interested in exploring these topics further please see the below article links: