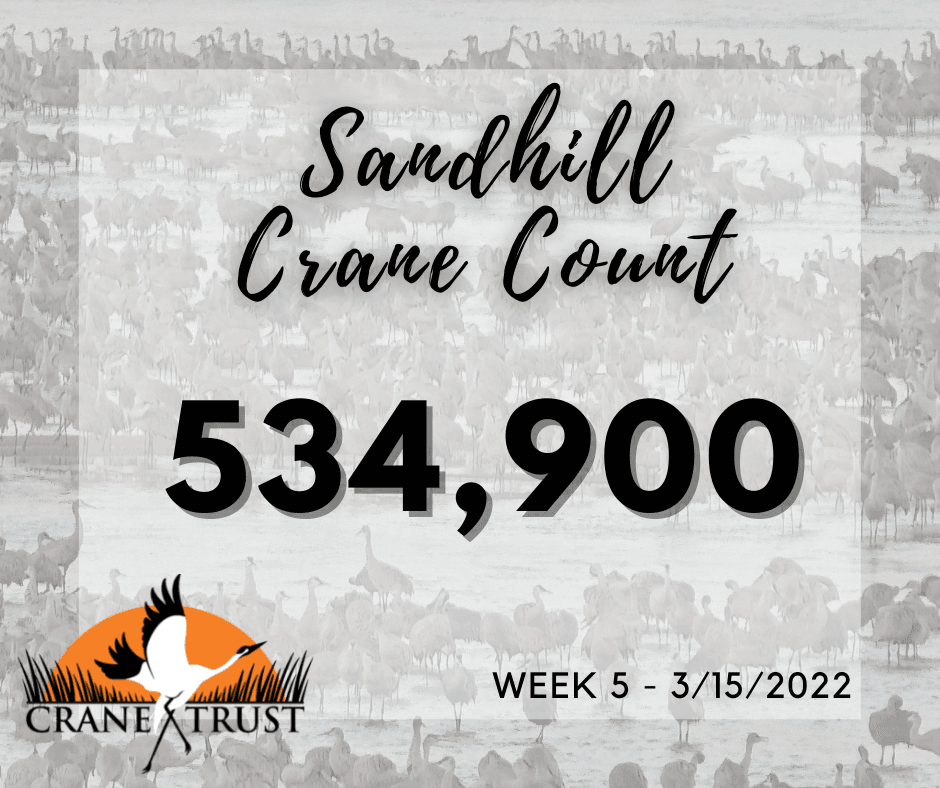 On 15 March 2022 we counted an estimated 534,900±34,200 Sandhill Cranes in the Central Platte River Valley (CPRV) between Chapman and Overton, Nebraska. Eastern segments (Chapman to Wood River) seemed full and near peak numbers but central and western survey segments (Wood River to Overton) will likely continue to see abundance increases over the next couple weeks, including today, with advantageous winds for migration. Our research indicates that eastern segments often peak as many as 2 weeks ahead of western and central segments (Caven et al. 2019). This is likely because eastern segments have a higher proportion of Greater Sandhill Cranes (Grus [Antigone] canadensis tabida), which have shorter overall migrations and exhibit more sensitivity to local weather conditions during migration than Lesser Sandhill Cranes (G. c. canadensis) (Krapu et al. 2014, Caven et al. 2019). Migration has advanced just over 1 day per year and early arrivals are associated with above average temperatures and drought conditions on the wintering grounds (Caven et al. 2019). However, these trends may be disproportionately driven by the Greater Sandhill Cranes. During the years in which we observe the highest peak counts, eastern and western portions of the survey area peak at similar times. However, when the timing of peak abundance differs significantly across the survey area we often observe a sustained plateau for several weeks, and a lower overall peak. If cranes in the eastern portion of the CPRV begin to leave just as those in the west begin to reach peak abundance, we may have more of a plateau than a sharp peak this year.

Flows in the CPRV have generally been below target flows for “normal” years (1,800 cfs) per the Platte River Recovery Implementation Program thus far during the 2022 spring migration (PRRIP). Flows at Grand Island, Nebraska, are currently just under 1,400 cfs at the writing of this blog post on Wednesday afternoon 16 March (USGS 2022). This may impact the forage value of wet meadows for Sandhill Cranes and Whooping Cranes (Grus americana) during this year’s migration (Davis et al. 2006).

My blog post is longer than normal this week, but there is a lot going in on the CPRV at the moment! One exciting piece of news is the release of “Counting Cranes”, a film by the “Platte Basin Timelapse Project” (PBT). This film provides a great general overview of what we do to count Sandhill Cranes, what we have learned, and why it is important. I want to say a public thank you to Mariah Lundgren, Grant Reiner, Michael Forsberg, Sydney Parks, and the rest of the PBT team for telling the story of our 20+ year aerial survey study in such a compelling and interesting way. The shots are gorgeous and the graphics are excellent. I highly recommend taking 12 minutes and 6 seconds to watch this short film from end to end. I personally appreciate the PBT team reducing the number of times I have to answer the questions “how and why do you count the cranes?” 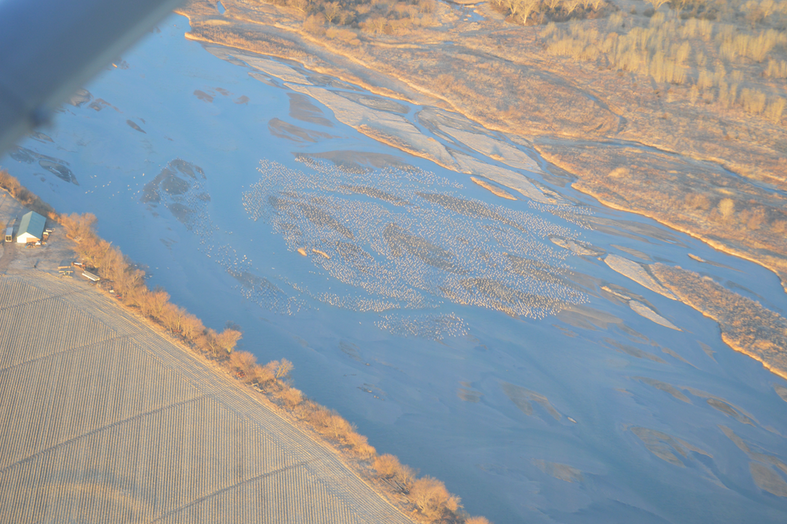