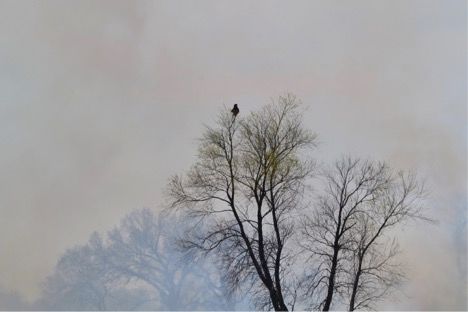 Controlled burning has a very positive and interesting impact on prairie ecosystems. Before the advent of roads and agricultural infrastructure lighting strikes would have often cause fires that ran across the prairie, being halted only by natural fire breaks such as wetlands or a change in weather. In addition to natural fires, Native Americans would use fire to draw in large grazers to prime hunting areas. These fires would have occurred historically at a regular frequency, possibly around every seven years, with great variation depending on the ecosystem and weather patterns. These massive fires would have often been followed by Bison grazing as fire returns phosphorous to the soil aiding vigorous plant growth free of senesced (previous years brown growth) materials.

Today with all the unnatural fire breaks and changes in the landscape it is our responsibility to ignite controlled burns and mimic historical fire regimes. This promotes plant diversity, and when timed correctly, suppresses cool season exotic plant growth, and removes woody encroachment (shrubs and young trees) from prairies. The process of rotational burning additionally creates a mosaic of habitats, influenced by fire at different time periods. Many birds prefer habitats burnt within the last year or two (Upland Sandpipers) and others prefer habitats not burnt in several years (Henslow’s Sparrows).

One interesting bird likes to arrive at a prairie while it is still aflame- the Swainson’s Hawk. This hawk is a relatively uncommon spring migrant throughout the central Platte River Valley of Nebraska; that is, unless there is fire on the ground. During our year-round property wide avian monitoring surveys we rarely spot Swainson’s Hawks, generally just one or two during the migration season aside from during controlled burns. However, the controlled burns, especially large ones (100+ acres) send up a massive plume of smoke that acts as a beacon to the migrating Swainson’s Hawks. We have regularly recorded 5 to 15 Swainson’s Hawks during controlled burns in the spring and fall and have observed them pulling prey from the fire (Figure 1). Occasionally, these controlled burns will injure, or confuse potential prey by removing all vegetative cover and in some cases provide a hot meal to Swainson’s Hawks. Though fire can appear destructive it is a natural part of the prairie ecosystem, providing nutrients and scarifying seeds for germination. Fire, clearly a natural phenomenon in the Great Plains, is well understood by the Swainson’s Hawk, which knows it can mean survival through an easy meal. Maybe the Swainson’s Hawk would be more aptly named the Fire Hawk?