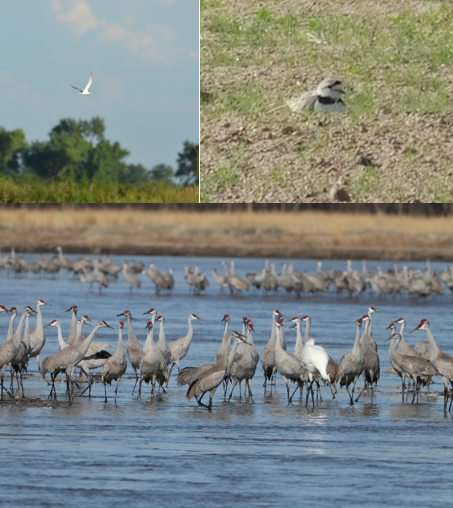 To celebrate this year’s Endangered Species Day, we wanted to discuss the stories of some incredible migratory birds that rely on the Platte River. Whether it be just a quick pit stop to refuel on their 2,500-mile-long migration or a longer stay to breed and raise a family, the habitat throughout the Central Platte River Valley and the rest of Nebraska is integral to the life history of the Interior Least Tern, Piping Plover, and Whooping Crane. Unfortunately, all three of these species are currently at serious risk of extinction and listed as endangered.

The Interior Least Tern was listed as endangered in 1985 following a population decline due to habitat loss and degradation, mostly of nesting and over-wintering habitat. The Northern Great Plains population of Piping Plover was listed as threatened in 1986, with two other populations being designated as threatened and endangered that same year. Interior Least Terns and Piping Plovers have historically flourished in their breeding along the rivers and tributaries in Nebraska, but due to dams, diversions, and other water management measures, viable nesting sites have decreased. Both species require a sandy, beach-like surface free of vegetation which is often difficult to find now. Luckily, organizations like the Crane Trust, the United States Geological Survey (USGS), and the Platte River Recovery Implementation Program are actively contributing to recovery of these species by restoring and creating more breeding habitat. Research is also ongoing to learn more about nesting (Baasch et al. 2017; Jenniges and Pletner 2008; Faanes 1983), movement (Roche et al. 2016), and habitat selection (Kirsch 1996).

The Whooping Crane was first listed as endangered in 1967. However, this species was on the brink of extinction years before as only 15 birds remained in 1941. This severe population decline can be attributed to more than a century of habitat loss and continuous hunting. While the Whooping Crane does not breed or winter in Nebraska, the Platte River between Lexington and Denman, Nebraska has been designated as “critical habitat” along their 2,500-mile migration route as it provides essential sources of nutrients, proteins, and fat. Since this species is rare and often elusive, much is still unknown about them and how to best manage for them, especially during migration. Luckily, in collaboration with numerous organizations such as the USGS Northern Prairie Wildlife Research Center, the United States Fish and Wildlife Service, the Platte River Recovery Implementation Program, the International Crane Foundation, and the Canadian Wildlife Service, the Crane Trust has been able to assist and provide support on telemetry, stopover, and natural history projects. Ongoing research includes habitat selection (Baasch et al. 2019; Pearse et al. 2017), stopover site use (Pearse et al. 2015), unusual behavior (Wright et al. 2014), and prey consumption (Caven et al. 2019; Geluso et al. 2013). Fortunately, with these decades of intensive conservation efforts, the population now consists of approximately 500 individuals and will hopefully continue to rise.